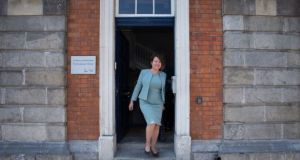 Former Garda commissioner Nóirín O’Sullivan told the Charleton Tribunal the controversy surrounding allegations of smears against Sgt Maurice McCabe continued up to October 2017, when, for the wellbeing of her family and herself, and An Garda Síochána, she retired. Photograph: Tom Honan

Serious allegations against the former Garda commissioner Nóirín O’Sullivan, which contributed to her having to resign from office, have since been withdrawn, the Charleton Tribunal has heard.

Giving evidence to the tribunal today, Ms O’Sullivan appeared to become emotional when she said it was no comfort to her now that claims that had contributed to her decision to resign as Garda Commissioner, and had damaged public confidence in An Garda Síochána, were no longer being maintained.

The chairman of the tribunal, Mr Justice Peter Charleton, said the charges, which had been made by the former head of the Garda Press Office, Supt Dave Taylor, were “central” to the question of his possible motivation for the matters that are being investigated by the tribunal.

The tribunal, the proper name for which is the Disclosures Tribunal, is investigating a claim made by Supt Taylor in a protected disclosure that during his time in the press office, he was instructed by the then commissioner, Martin Callinan, to conduct a smear campaign against Sgt Maurice McCabe. He also claimed that this was known at the time to the then deputy commissioner, Ms O’Sullivan.

Mr Callinan has told the tribunal in evidence that he did not order any smear campaign and that in his view Supt Taylor, in making his claim, was motivated by a grudge against Ms O’Sullivan, who moved Supt Taylor from the press office to the traffic division after she became commissioner.

Mr Justice Charleton, addressing counsel for Supt Taylor this morning, said the evidence suggested that after he was moved from the press office, Supt Taylor decided to “cause immense trouble” by sourcing information about serious crimes and leaking it “wholesale” to the media.

This had the potential to compromise serious criminal investigations, the chairman said.

Supt Taylor was later “justifiably arrested” and availed of his right not to comment. However he had now, in evidence, admitted that he had done the things he was suspected of doing.

Mr Justice Charleton said Supt Taylor’s “core allegation” was that he had discussed the alleged smear campaign against Sgt McCabe with Ms O’Sullivan, but he had not provided the tribunal with any alleged dates or time or circumstances.

He had “apparently” told others, Mr Justice Charleton said, that there had been “incriminating texts flying” between Mr Callinan and Supt Taylor as part of the alleged smear campaign, with these being copied to Ms O’Sullivan, and that Ms O’Sullivan wanted Supt Taylor’s phone seized so that her knowledge of the alleged smear campaign could be “covered up”.

Sgt McCabe has told the tribunal that he was told by Supt Taylor that the alleged smear campaign involved hundreds if not thousands of text messages. The tribunal has been told in statements by politicians Clare Daly and Mick Wallace, that they were also told this by Supt Taylor, as has journalist Mick Clifford, who has written extensively about the McCabe issue.

However Supt Taylor, in his evidence, has said he never made any such claim to Sgt McCabe, the politicians, or Clifford.

Supt Taylor has, Mr Justice Charleton noted, apparently told these parties that his phone was seized when he was subsequently the subject of the criminal inquiry, so that the smear campaign, which had been known to Ms O’Sullivan, could be “covered up”. However, the chairman noted, Supt Taylor was now saying “otherwise”.

He said the tribunal was examining all of these matters so it could consider whether Supt Taylor was “bitter” and had made a series of false claims in his protected disclosure to wreak revenge on the person he felt was responsible for his plight, Ms O’Sullivan.

The chairman asked Michael O’Higgins SC, for Supt Taylor, if his client was still making these claims against Ms O’Sullivan, who was in the witness box. He asked if it was the case that Supt Taylor was now saying he was “emotional” at the time and “said things he shouldn’t have said”.

Mr O’Higgins noted that his client had been the first Garda superintendent in the history of the State to be arrested and felt he did not have to be arrested. He had felt humiliated after his shoelaces and belt and other items were removed from him before he was put in a cell.

No charges were brought against Supt Taylor and he has since returned to work.

Following reports in The Irish Examiner by Clifford, in October 2016, about protected disclosures from Supt Taylor and Sgt McCabe, alleging a smear campaign, there was a media and political storm that included calls for Ms O’Sullivan’s resignation from Ms Daly.

Sgt McCabe’s protected disclosure was based on what he said he had been told by Supt Taylor, so there was only one source for the allegations.

Ms O’Sullivan said the media and political controversy was enormous and she was repeatedly asked about whether she would resign. The controversy continued up to October 2017, when, for the wellbeing of her family and herself, and An Garda Síochána, she retired.

Asked by her counsel, Conor Dignam SC, if it was of any comfort to her that much of what had been alleged by Supt Taylor was no longer being maintained, she said “absolutely not”, bearing in mind the effect the claims had had on her, her family, and public confidence in An Garda Síochána.