All you need to know about the marriage referendum 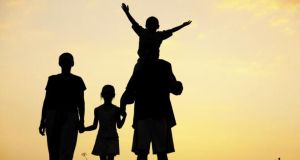 What are we voting on?

Voters will be asked whether the Constitution should be changed so as to extend civil marriage rights to same-sex couples. The proposed amendment to article 41 is the insertion of the line: “Marriage may be contracted in accordance with law by two persons without distinction as to their sex.” The Irish version, which takes precedence, reads: “Féadfaidh beirt, gan beann ar a ngnéas, conradh pósta a dhéanamh de réir dlí.” If the proposal is passed, a marriage between two people of the same sex will have the same status under the Constitution as a marriage between a man and a woman.

Married couples of the opposite sex or the same sex would be recognised as a family and be entitled to the constitutional protection for families.

What will happen if the proposal is rejected?

The present situation will continue without change.

Why are we voting on this now?

Before the 2011 election, the Labour Party said it favoured a referendum on same-sex marriage. Fine Gael’s manifesto was silent on the issue. When the two parties were negotiating the programme for government, Labour wanted to insert a pledge on a referendum but Fine Gael did not. The compromise was to send the issue to the constitutional convention, a deliberative forum comprising 33 politicians and 66 members of the public, on the understanding that if it recommended a referendum the Government would hold one. The convention’s overwhelming support for the idea (79 per cent in favour) gave momentum to advocates inside and outside Government. In November 2013, the Cabinet formally agreed to put the question to the people and Taoiseach Enda Kenny made his first public declaration of support for the campaign.

Will a Yes vote redefine marriage?

The Constitution doesn’t define marriage, and the amendment doesn’t introduce a definition. In the absence of a constitutional definition, the Referendum Commission explains, the generally accepted common law definition of marriage is “the voluntary union of one man and one woman, to the exclusion of all others”. This definition has been adopted by the Irish courts on a number of occasions.

A Yes vote would redefine the view as to who can marry by extending the right to same-sex couples.

If the referendum is passed, will there be any change in the status of opposite-sex marriages?

Will there be any change in the status of marriage itself?

We already have civil partnerships. What’s different about civil marriage?

The family, under the Constitution, is given special status and certain rights. “Essentially what it means is a married couple cannot be treated less well than an unmarried couple,” says Mr Justice Kevin Cross, the chairman of the independent Referendum Commission. “That has applied in the past in certain cases in relation to taxation, social welfare and the like. A married couple have a legal status that cannot be disimproved vis-a- vis the unmarried couple.”

Will civil partnership still exist if the referendum is passed?

There will be no new civil partnerships. Existing civil partners will retain that status and the rights, privileges, obligations and liabilities that go with it unless they choose to marry. Whether they marry is up to them. If they do, their civil partnership will be dissolved.

If we vote Yes, will priests be forced to perform same-sex marriages?

No. The proposal is to extend civil marriage rights. Any church retains its right to refuse to solemnise any marriage. Today, for example, a priest can refuse to solemnise a couple if one of the individuals is divorced or has not attended a pre-marriage course. That right of refusal won’t change. In fact it will be strengthened. The Marriage Bill 2015, which will be enacted in the event that the referendum is passed, states that priests or any other solemnisers will not be obliged to perform same-sex marriages.

If I vote Yes, am I voting to allow same-sex couples adopt children?

No. Up until recently, only a married couple or a single person (regardless of sexuality) could adopt a child. Some children in Ireland have been and are being raised by same-sex couples, though in such cases only one of the two individuals, in the eyes of the law, was the child’s parent. In recent months, however, the Oireachtas passed the Children and Family Relationships Bill. This major reform of family law allows civil partners and cohabiting couples who have lived together for three years to adopt. That will remain the case whatever the outcome of the referendum.

Have other countries introduced same-sex marriage?

If the referendum passes, Ireland will become the first country in the world to approve a national referendum expressly guaranteeing same-sex marriage in its Constitution. A number of other countries have introduced it via the courts or by parliamentary vote. At present, 17 countries (including France, Argentina, Denmark, Norway and Spain), as well as a number of US states, allow same-sex couples to marry.

Will schools be required to change the way they teach about marriage?

Mr Justice Cross points out that, at present, children in religious schools are taught the religious meaning of marriage – notwithstanding the fact that divorce and contraception are available. They may also be taught, in civics classes or the equivalent, about the law on civil marriage. None of that will change.

If the referendum is passed, will same-sex couples have a right to access surrogacy services?

Surrogacy is not mentioned in the Constitution. At present it is unregulated in Ireland. So there is no legal right to access surrogacy services and no legal prohibition on accessing them. The Government has said it plans to publish surrogacy laws, and they will apply whatever the result of the referendum.

“It’s sometimes said, which is the case, that the Supreme Court have talked about the right of a family to procreate,” says Mr Justice Cross. “However, the courts have never given, and there is no such right, to access any artificial methods of procreation. The right to procreate was talked about in a case involving a prisoner who wanted to procreate with his wife. The right was acknowledged, but the physical ability of him to exercise that right was not supported. So it’s a right to procreate naturally if possible.”

If we vote Yes, would it limit the ability of the Oireachtas to regulate in any way?

“Whether these requirements are satisfied in any given circumstances would depend on the evidence presented,” he said. “It couldn’t be done on a whim. It couldn’t be done on a prejudice. If there were good evidence, for example, that children fared better under one sort of parents than another, well then it is possible that such differentiation could be introduced, subject to the requirements that I mentioned a moment ago.

“If you don’t believe that there is any such evidence about different treatment, well then it won’t happen and it can’t happen. So the short answer would be: unlikely but not impossible.”

So does the referendum have anything to do with adoption or surrogacy?

When this was put to Mr Justice Cross, he responded as follows: “This referendum is about marriage – who may marry, who may not marry. If it passed, it would have the effect that I have described. Surrogacy is not regulated by the Constitution at all. There is no proposal that it shall be regulated by the Constitution. Surrogacy at the moment is not regulated by law. It is intended to regulate it by law. That regulation will apply irrespective of whether the referendum is passed or not.

“Adoption is regulated by law. At the moment, adoption is available to married persons, to single people and now, as of recently, to same-sex couples. There will be no change in that if the referendum is passed.”

Would a Yes change the Constitution to mean that children do not have a right to a mother and father?

No. There’s no such right. Many children don’t have a mother and father. There would be no way to enforce such a right.

Would a Yes vote change the constitutional provision on the place of the woman in the home?

No. Under one of the quirkier parts of article 41, the State recognises “that by her life within the home, woman gives to the State a support without which the common good cannot be achieved”. It goes on to say that the State will try to ensure that mothers “shall not be obliged by economic necessity to engage in labour to the neglect of their duties in the home”. Those sections would remain unchanged by a Yes vote.

In Belfast this week, a bakery was found to have discriminated against a gay man because it refused to bake him a cake with “Support Gay Marriage” on it. If we vote Yes, could we have a similar judgment in the Republic?

A similar claim might succeed in the Republic, but the outcome of the referendum wouldn’t influence the law in this area either way.