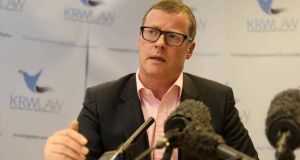 The latest legal initiative comes from the Belfast solicitor Kevin Winters, who specialises in Troubles-related litigation.

A fresh attempt to sue Libya for supplying the IRA with the plastic explosive Semtex during the Troubles is being launched by victims and the bereaved in Northern Ireland.

Claims have been lodged with the high court in Belfast on Thursday on behalf of two men who are seeking compensation respectively for the 1993 Shankill Road bombing and a blast on the Falls Road, west Belfast, in 1988.

Victims of other atrocities are to lodge claims next week, including those affected by the 1987 Enniskillen Remembrance Day bombing and the so-called “Good Samaritan Bomb” in Derry the following year.

The Provisional IRA received extensive, secret shipments of Libyan weapons during Muammar Gadafy’s time in power. The most devastating material deployed in the republican terrorist campaign was Semtex.

Previous efforts to secure redress from Libya have foundered in British and US courts despite the fact that Libyan assets have been frozen in the UK. A parliamentary report last year criticised the UK government for failing to secure compensation.

The latest legal initiative comes from the Belfast solicitor Kevin Winters, who specialises in Troubles-related litigation. One of his colleagues from KRW Law, Chris Stanley, has also unearthed foreign office documents from the 1980s that revealed more about the British government’s knowledge of the smuggling.

This is the first time claims have been pursued through the Northern Ireland courts. The lawyers will have to overcome formidable legal obstacles such as time restrictions on bringing cases, state immunity limitations and questions about whether the issues can be decided by judges.

Mr Winters points to exemptions under the State Immunity Act 1978 whereby foreign states are not immune to proceedings if they involve “death or personal injury or damage to or loss of property caused by an act or omission in the United Kingdom”.

The legal action aims to provide access to billions of dollars of funds in the UK seized by the British government after the collapse of the Gadafy regime in 2011. At present the claims are against Libya, but it is possible they may be extended to include the British foreign office for allegedly failing to obtain compensation for victims.

In 2017, the Northern Ireland affairs committee concluded that between the 1970s and 1990s Libya provided the IRA with “many tonnes of arms and ammunition, millions of dollars in finances, military training, and explosives.

“In particular, through a series of shipments, which took place in the mid-1980s, the regime supplied somewhere between 2.75 and 10 tonnes of Semtex – a highly powerful, malleable and virtually undetectable plastic explosive.” Semtex was used in the Enniskillen attack.

Documents extracted from the foreign office through freedom of information requests show exchanges between diplomats in Tripoli, Paris and London after the MV Eksund was intercepted in the Bay of Biscay by the French navy in November 1987 with 120 tonnes of weapons onboard.

In one comment, a foreign and Commonwealth office desk officer states: “If a minister is challenged to prove Qadhafi’s [alternative spelling] connection with PIRA – as it seems he will be – we had better not duck it.”

In another note, an official at the British embassy in Dublin wrote: “Libyan support for the IRA, though clearly generous when the relationship is close, has never seemed to be based on much interest or understanding of Irish republicanism.”

The legal claims, drawn up with the help of the barrister Nick Scott, argue that: “It is entirely implausible to think that Libya did not foresee the risk of harm ... caused by the Provisional IRA detonating bombs when Libya was providing PIRA with Semtex. Plainly, Libya would have foreseen that the Semtex would have been used in bombs and that personal injury was likely.”

Mr Winters told the Guardian: “We have issued the first of a number of high court actions ... The cases are directed against the state of Libya, alleging it supplied the explosives used to kill or injure in a series of incidents spanning a period 1987 to 1994. We will ask the high court in Belfast to seek leave to serve the proceedings outside the jurisdiction after [submitting further] discovery applications against the Police Service of Northern Ireland.

“It’s disappointing that despite the NI affairs committee confirming in May 2017 the supply of Semtex from Libya, the PSNI have steadfastly refused to confirm its use in specific incidents.

“In the absence of any good reason one can only assume it’s to prevent hundreds of legal actions for similarly affected bereaved and injured. The focus of this group action it to access the billions of restrained funds seized by the British government after the collapse of the Gadafy regime in 2011.

“It remains totally unacceptable that victims in Ireland and Britain were deprived of compensation yet most cases involving other countries including the USA, France and Germany were sorted out.” – Guardian