A click from the courts - online libel never easier 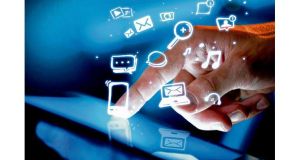 LEGAL ANALYSIS:Social media sites and users need to smarten up their act as libel cases are being taken and won

Social media is arguably the most powerful form of communication in the world. In recent years news and information has spread quicker through Facebook and Twitter than any traditional media method. However, with increased and more readily available communication tools, publishing libel has never been easier.

Many are unaware how easy it is to defame someone on social networking sites – it often takes just one click. You can get into trouble not only for posting defamatory comments, but also for retweeting – reposting someone else’s libellous tweet.

“The problem is social expectations,” says UCD law lecturer TJ McIntyre. “People know what they can and can’t say in a formal and informal context, but this changes when it comes to the internet.

“You may be speaking to a very small number of friends on Facebook or Twitter but you are still exposing yourself to defamation laws developed with professional journalists in mind.”

Earlier this year businessman Declan Ganley received an apology and an out-of-court settlement after defamatory comments were made about him on Twitter. The decision showed that the publication of comments online on social networking sites were treated the same as publication in a newspaper.

McIntyre, who specialises in IT law, says one of the problems with online publishing is the ability of information to be rapidly dispersed and logged forever. “If you talk about someone on the phone, the chance of them finding out is small. Online comments are more permanent though, and the evidence is searchable.”

Even if a user has deleted a defamatory comment, by that stage it may have been retweeted by other people, and has the ability to rapidly reach a huge audience if the post goes viral.

Several years ago, demands by law firms to remove defamatory comments online were largely ignored by social media sites, according to Beauchamps partner Gary Rice. “Three or four years ago if you complained to Twitter or Facebook about libel, they would have ignored you. However, this position has changed because they now have their European headquarters in Ireland.”

Rice says the decision by internet giants Google, Facebook and Twitter to establish their European headquarters in Dublin has opened them up to Irish defamation laws and EU laws on libel and privacy. “They used to just cite US freedom of speech laws and the American constitution first amendment. They can’t do that anymore.”

While the existing legislative framework is clearly deficient and Ireland is yet to have a Privacy Act, the Irish courts have been seen to capably address the challenges associated with defamation and privacy actions arising from internet use, according to William Fry associate Sinead Keavey. “It is quite clear from the Eoin McKeogh case that the Irish courts will not hesitate in granting orders to reveal the identities of authors of defamatory material to plaintiffs.”

McKeogh brought a defamation case against YouTube, Google and Facebook last year, after discovering he had been wrongly identified online as a man who had left a taxi without paying. Orders were granted requiring certain of the named defendants to provide Mr McKeogh with details of the identity of the web users who had defamed him via their websites, so he could take steps against them in order to protect his good name.

“Where a complainant can show substantial damage to reputation, the ISP will reveal the name of the author. The ISP is then immune from responsibility.”

The EU Electronic Commerce Directive which was adopted by the European Parliament in 2000 and implemented into Irish law, provides that ISPs which are mere conduits will escape liability if they did not initiate, select or modify the information contained in the transmission and did not select the receiver of the transmission.

If ISPs are also hosts they will not be liable for damages if they have no actual knowledge of the unlawful activity or information.

Ryanair last week secured a High Court order compelling Eircom to disclose to the airline the identities of two anonymous parties who have been making posts about Ryanair on a pilots website which the airline claims are “highly defamatory”. Ryanair sought the orders because it intends to sue the two parties.

However, the courts will not tolerate any failure or delays in removing defamatory material once service providers are on notice, according to Keavey.

“If an ISP had an opportunity to review and remove a defamatory comment once a complaint was made and they did not do so, it will not be looked upon favourably by the courts. While you have to balance the rights of freedom of expression, I would recommend immediate removal if there is a complaint, to give to you time to investigate.”

Many newspapers are moving towards a post-publication moderation system in-line with the EU Electronic Commerce Directive, according to David Cochrane, communities editor of The Irish Times. This means comments are not moderated by the newspaper unless they are flagged as problematic.

“Previously every comment was approved before appearing on the website. If a comment put up was defamatory and this comment was approved by the newspaper, there was a concern the newspaper was more exposed to liability. However, if you have no prior knowledge, as with a post-publication moderation system, liability only falls into place when a problem comment is flagged and no action is taken.”