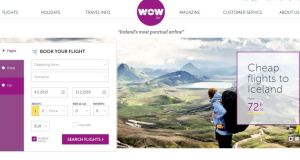 Wow Air, which uses A320 and A321 craft, is a relative newcomer to the international jet set, having been set up in 2011 by Icelandic entrepreneur Skúli Mogensen.

The first salvo in what could become a transatlantic price war has been fired by a low-fare Icelandic airline which is promising to fly people from Dublin to Boston or Washington DC for less than €300 return.

From early October, Wow Air is to introduce a new route from Dublin to the two US cities via Reykjavik, with one-way fares starting at €149 including taxes. By comparison, the cheapest return flights currently being offered by Aer Lingus to the US in October are €557.

The flights will operate on Tuesdays, Thursdays and Sundays, and the announcement comes just three months after the airline rolled out plans to fly from Dublin to Reykjavik. That route will open on June 2nd this year.

The Boston flight – which includes a two-hour stopover in the Icelandic capital - will be 12 hours and 20 minutes, with the second leg lasting just under six hours. The Dublin to Washington flight, including the stopover, will last 12 hours and 45 minutes.

A direct flight from Dublin to Boston with Aer Lingus, meanwhile, lasts just under seven hours, while the airline’s flights from Ireland to Washington take at least 10 hours and 30 minutes with a stopover in Boston.

Wow Air, which uses A320 and A321 craft, is a relative newcomer to the international jet set, having been set up in 2011 by Icelandic entrepreneur Skúli Mogensen.

“Our aim is to transform low-cost transatlantic flights and make travel to the US affordable for everybody,” he said as the announcement was made.

It was ranked as the 7th best low-cost airline in Europe at both the 2013 and 2014 Skytrax World Airline Awards, and was the youngest airline in the top ten. It flew its one millionth passenger in December 2014.