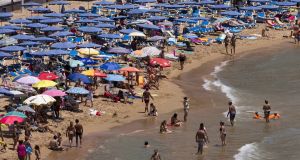 Holidaymakers sit beneath parasols and play in the surf on the beachfront in Benidorm, Spain Photograph: Matthew Lloyd/Bloomberg

As many as 15,000 Irish holidaymakers have been hit by the sudden collapse of online travel agent Lowcostholidays on Friday evening.

Travel agents who have used lowcostholidays to secure rooms for their customers are also like to face large bills as a result of the closure.

People who booked package holidays – including flights and accommodation - with lowcostholidays.ie will be covered under the auspices of the Commission for Aviation Regulation (CAR) as the travel agent is bonded under Irish law. The commission will publish the details of how people impacted can make claims on Monday.

However, anyone who booked hotel accommodation only through the website will not be covered by the tour operator’s bond and will have to pick up the tab themselves and try and get money back via their bank or credit card company.

Lowcostholidays has had a significant presence in the Republic since 2010 and more than 100,000 Irish people have signed up to its weekly email newsletter.

“The scale of the collapse is only just emerging,” said Pat Dawson of the Irish Travel Agents Association (ITAA).

“Lowcostholidays actually has a capacity for 90,000 people travelling out of Ireland but I think when those already on the ground are added to those with future bookings there will be around 15,000 people hit,” he said.

“Another element is the travel agents,” he added. “A lot of our members would have had people coming in looking for destinations where tour operator capacity is low.”

The agents would have booked flights online with directly with airlines and booked accommodation with lowcostbeds. “People overseas are now being told their rooms have not been paid for so travel agents will have no choice but to absorb that cost which could run to hundreds of thousands of euro,” he said.

Mr Dawson said a lot of Leaving Cert students currently on holidays in locations such as Spain would have been particularly impacted.

Irish customers are “sickened” by the closure of the site which was heavily promoting a ticket sale just hours before it went out of business.

“I am getting married in two weeks and my honeymoon to Mexico has been booked with lowcostholidays,” one reader told The Irish Times. “When I rang hotel they said they hadn’t received any payment even though we have paid lowcostholidays in full. I am sickened.”

1 One hundred Irish retailers for all your online Christmas shopping
2 Thirteen further deaths and 1,269 new cases of Covid-19 recorded in the Republic
3 Extra day to Dáil debate on extending State’s powers during pandemic
4 Level 5: Fines for house parties and breaching 5km rule, while permitted funeral attendance up to 25
5 School ordered to reopen after closing due to Covid-19 fears
Real news has value SUBSCRIBE