The gold that glitters still needs a mark

The hallmark is one of the oldest consumer protection mechanisms, so look for it before buying any precious metal 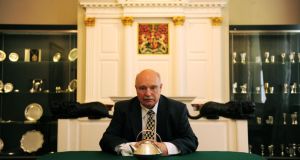 Hallmarking of precious metal jewellery is possibly the oldest form of consumer protection and dates back to the 14th century when King Edward I signed a statute into English law.

In those days trying to pass off base metals as precious ones would most likely have led to dire consequences, including execution. Today there are only fines or, at the very worst, a spell in jail at stake. But even though such penalties exist and, since last July, retailers are obliged to display a notice about hallmarks to aid the consumer, jewellery is still being sold without the required marks or the necessary notice.

All items of gold, silver and platinum for sale must be assayed (tested) and hallmarked. They must either carry an Irish hallmark, an International Convention hallmark or another approved hallmark from an EU member state in order to be legally offered for sale in the State.

The Irish Assay Office is tucked away discreetly within Dublin Castle and is charged with independently checking that precious metals are indeed the quality claimed. Ronald Le Bas, the assay master, points out that with the cost of a hallmark being just 47 cent “you’d wonder why a trader wouldn’t be actively promoting hallmarks” and why they wouldn’t see it as a selling point.

An Irish hallmark shows Hibernia as the Assay Office symbol, a mark showing the metal, its purity and a maker’s mark. There are also optional marks such as a letter depicting the year an item was assayed.

A hallmark is what enables an antique dealer to tell you that your granny’s set of six Art Deco-style coffee spoons are indeed sterling silver, made by Duncan & Scobbie and assayed in Birmingham in 1947.

What you will often see on jewellery for sale, however, is just a maker’s mark or the number 925 on silver.

“Just because something has 925 on it could mean it was made at 9.25 this morning,” says Paul O’Rourke, chairman of the Federation of Jewellery Manufacturers of Ireland. He has heard of people who have bought “diamonds” abroad which have turned out to be cubic zirconia.

The goldsmith Declan Killeen often meets people wondering if the metal they have bought is what they were told it was. “It’s hard to tell really. If you’re buying abroad and you’re buying at a market you don’t really know what you’re buying.”

In Britain, several retailers have been fined for selling non-hallmarked jewellery, in some cases having claimed pieces were of higher-grade gold than they actually were.

Pricewatch asked the National Consumer Agency (NCA), as the relevant enforcement agency, what its policy is regarding jewellery being sold without an approved hallmark.

“The National Consumer Agency investigates complaints regarding misleading representation of any product, including jewellery,” said Karen O’Leary, NCA chief executive. “In cases where a piece of jewellery does not have an approved hallmark, this does not necessarily mean that it is misleading activity. Misleading activity could be where a product is described as one thing, for example, sterling silver, but is in fact, another, for example, plated silver.”

Many consumers do want to see some sort of guarantee of metal quality, says Claire Coleman of Stradbally Jewellery in Waterford. Americans, she says, are particularly keen.

“We would get people looking for hallmarks all right,” she says. Coleman feels that a hallmark adds to the value of a piece and if she doesn’t see one, she presumes it’s a cheap imitation.

“It is a guarantee but it is quite expensive, especially for small craftspeople.”

However, most of the jewellery sold here is imported. “Sterling silver Irish hallmarked rings” is one sign Pricewatch noticed. But some Irish craftspeople are declining to send their work to the Assay Office to be hallmarked.

One jeweller compared hallmarking to testing the canvas of a painting rather than seeing the painting or piece of jewellery as a work of art.

“Strictly speaking, it’s illegal to sell jewellery that’s not hallmarked,” he said. However, he does agree that the consumer needs protecting and would like to see the State undertaking spot inspections, as happens in some countries.

Pricewatch asked the Crafts Council of Ireland what its view was of members not sending their work to be hallmarked. A spokeswoman said she was not aware of it. Susan Brindley, head of public affairs and communications said that the council “would encourage all our registered clients to operate within the parameters of the Irish statute”.

“As to why they’re not complying, I’m not certain,” says Le Bas, who feels that “it’s important that the National Consumer Agency follows up on it.” A large part of the problem, he feels, is the number of non-traditional outlets selling jewellery “and there’s an amount of ignorance on the part of proprietors”.

The Assay Office will buy from consumers any hallmarked item bought, provided it has not been altered, which is not the metal quality it states it is. This is a guarantee extending back to 1637. If you cannot read the hallmark, Le Bas says, you should ask for a magnifying glass and if you can’t see a hallmark then run a mile.

Le Bas suggests that, if concerned, consumers should make it a condition of sale that they have an item they wish to buy tested at the Assay Office. If an item is not up to standard, the office will then take it up with the retailer. “Items that are not hallmarked are not hallmarked for a reason. They may not be what they’re purporting to be. There’s no logical reason why they’re not hallmarked,” he says.

Restaurants bookings surge before reopening with ‘busiest December’ ahead