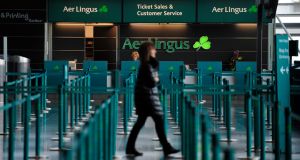 “Surely one board for Terminal 1 and another for Terminal 2 with clear markings would be a good idea.” Photograph: Aidan Crawley/Bloomberg

We got a mail from a reader from Dublin by the name of Magdalen O’Connell which may resonate with anyone who has ever tried to navigate a confusing airport in the hours before dawn.

Last October she had booked herself a course in a language school in Salamanca and arranged to fly with Aer Lingus to Madrid and then take a bus onwards to the school.

Her taxi arrived at 4.30am ahead of the flight, which was scheduled to depart at 6.15am. She arrived in Terminal 2 at 4.50am, so was in plenty of time. It was at this point that things started to go off the rails.

“For some reason I had not been able to get the check-in confirmation on my phone so I went to the desk to pick up my boarding card. It did not have a gate number on it so I bought myself a cup of coffee and a croissant and looked at the screens and saw the gate number was 113.”

She says she struggled to follow the route to the gate as the airport was now full of people. She was surprised when she passed the security again and says she must have walked least half a mile to get to her gate. Eventually she realised she had walked through the airport to Terminal 1 by mistake.

“To this moment I can’t understand how I didn’t cop on, but maybe it was tiredness,” she says. As it happens there was a flight to Madrid at gate 113, but it was a Ryanair flight. The horror of my situation did not unfold until I asked one of the Ryanair staff how to get back to the Aer Lingus gate and she told me that as it was now 5.45am, the flight was closed. Ryanair won’t ring another airline, nor will Aer Lingus as I found out later. Can you imagine my state of mind standing there at 5.50am knowing my plane was still there but having been told that I had missed it?”

So she started walking through the airport. “I can’t remember who told me I would have to go to baggage reclaim, but someone did, and somewhere along the way a member of staff with a wheelchair saw my distress and give me a lift to the baggage reclaim area. On my way, two people, separately, told me that it was very common for people to misread the boards.”

She then found out that there was another Aer Lingus flight to Madrid later that day. “At the Aer Lingus customer service desk a pleasant enough staff member told me the only other flight to Madrid that day was already overbooked. She said I could go standby for that flight but that if I did get a seat it would cost €75 because I had missed my original flight. She also noted that the flight I had missed had been slightly delayed, and if it turned out that the delay was because my baggage was being taken out of the hold, I would have to pay another €100.”

She left the customer service desk in dismay.

She then heard that Iberia had a flight going to Madrid and asked several staff how to find the Iberia desk. “I was directed all over the place until one blessed person explained that Iberia didn’t have a desk but were administered by Swissport in the basement at Terminal 1. The Swissport staff had compassion that both the Ryanair and Aer Lingus staff lacked. They let me use their phone to make a call and one of them came with me to the Iberia check-in desk to see if there were seats on the plane leaving at 11.10am.”

The airline staff said they would not know until after 10am and she was advised to come back to them. So she hung around for a couple of hours and then, at 10.50am she got a seat – in business class – although that did come at a hefty cost. “Don’t ask how much but I had no alternative if I had had to go home that day I think I would’ve cancelled everything and that would have cost me even more money.

“I had to go to the Iberia desk, get my boarding pass and ring the school in Salamanca, again courtesy of Swissport, before heading to the gate. I hardly remember getting on the plane.”

She says the experience had “all the ingredients of a horrible nightmare and I feel completely foolish about not realising I was in the wrong terminal. But surely one board for Terminal 1 and another for Terminal 2 with clear markings would be a good idea”.

We contacted the Dublin Airport Authority and a spokeswoman expressed great sympathy for our reader’s plight. She said the airport put a lot of thought into how to best signpost the facility and said she would bring the matter to the attention of airport staff who look after “way-finding”. She said anyone who is ever in any doubt over the location of their gate should check with airport staff along the way.