Supermarkets’ love affair with the customer ended long ago

As Superquinn moved closer to vanishing from the map last week, the supermarket wars moved up a notch 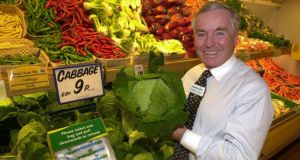 “Feargal Quinn was the housewives’ choice. Every Valentine’s Day he stood at the checkout with a red rose and a kiss for each female customer.” Photograph: Alan Betson

The last proprietor but one of the Superquinn supermarket chain, Feargal Quinn, wrote a book, Crowning the Customer. It was published by O’Brien Press in 1990. The copy I managed to get hold of has been taken out of the public library recently, read many times, and has lots of underlinings and marks in its margins.

It is a highly readable, well-organised book that does not take itself too seriously. Its first chapter is called “How a small (165cm) grocer got to write a book”. In its optimism, focus on customer service and sheer verve, the book reads like something from another galaxy. For example, chapter eight is called “How (and why) to create more complaints”. Then there’s a seven-point list of what to do if a customer complains: “Express regret quickly. Trust the customer. Never, never put the customer in the wrong,” and so forth. At which point any Irish customer is entitled to ask: What the heck happened?

Not now that Superquinn’s two dozen supermarkets are being swept into the SuperValu trolley once and for all. Not now that the staff in Superquinn turned white-faced last Tuesday as the news broke (along with word of the closure and job losses at four Marks & Spencer stores). And not now that more time was spent talking about the fate of Superquinn’s sausages – which have always been a bit pale-looking, in my humble opinion – than talking about the fate of the 102 support staff at the Superquinn offices in Lucan, many of whom could lose their jobs.

The sausages are fine, by the way. On Friday they were wearing a defiant sticker on each pack of 12, which declared, a little flabbily, “I’m here to stay”.

Not now that Superquinn sales have fallen by 22 per cent in the past decade.

But then. Back then. Feargal Quinn was the housewives’ choice. Every Valentine’s Day he stood at the checkout with a red rose and a kiss for each female customer. “It was a bit much,” said a female customer close to The Irish Times.

She refused to be kissed, allegedly.

This is all before Quinn was chairman of An Post and insisted on stamp machines. Became a senator. Began advising other business people on that TV show Retail Therapy. And sold Superquinn to Select Retail Holdings for €429 million in 2005.

This was in Superquinn’s golden period, during which no one could get over how beautifully stacked its vegetables were – I’m telling you, this is true – and people were deserting Quinnsworth in droves. (This was before Quinnsworth was Tesco but after H Williams had been eaten for breakfast, and when Dunnes Stores was everywhere. It’s complicated.)

This was back when kids got to hold signs which said “I’m Helping my Mummy to Shop” – or words to that effect – as they were dragging the washing powder off the shelves in Superquinn. Quinn had also removed sweets from the checkouts so their mothers could get home in one piece.

This was back in the days when Superquinn had something called a customer panel (est 1975), and you might very well have been asked to join it and to give it the benefit of your opinion on store layout, presentation and so on. “It made you feel important,” says the female customer close to The Irish Times.

It was before Superquinn became famous for its Victoria sponge, cheeses, brack and that mad little hacksaw you could use to cut the stalk off your broccoli.

I am not making this up – Quinn made it up. That lift out of the grim 1970s retail reality came from him. It was a significant cultural shift for the Irish consumer, when a business would actually worry about how the vegetables looked, or how your kids interfered with your shopping – and you would happily pay the business extra to do so. It is extraordinary when you think about it. And a bit bonkers. Of cour- se it was another of our heroic attempts to live in what we thought was the US.

‘So excited’
It was also an interesting moment in management terms. The final chapter of Crowning the Customer is actually called “Don’t let the accountants win”. Earlier in the book Quinn wrote: “I remember the impact that Tom Peters’s book In Search of Excellence had on me. It arrived from America shortly after it was published, and I started reading it one evening after work. I didn’t go to bed that night I was just so excited about it.”

Whatever happens in the supermarket wars, it is unlikely that supermarkets will ever be treated with that enthusiasm by either customers or managers. Supermarkets stopped feeding Irish dreams a long time ago. And no one in food retail says things like: “Fun and surprise: they are the jokers in the pack of the customer-driven person. Learn how to use them.”

It’s going to be a long time before we hear that kind of thing again.