Professional titles are not always a guarantee

Here, unlike in other other EU states, anyone can set up as an engineer, the accountancy sector is largely unregulated, and you can become a physical therapist in 16 weekends 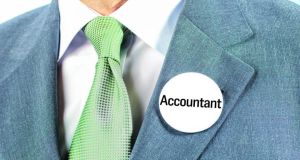 A significant number of so-called accountants operate outside the regulated sector. In most major European countries the law prohibits abuse of the term ‘accountant’

When is an accountant not really an accountant? And what about a engineer? Consumers may believe they understand the qualifications of someone they are hiring simply by their title, but this is not always the case.

Accountant – regulated or not?

Who do you go to when you need tax advice, help with tax returns or your company’s books to be audited – an accountant. But is that accountant as well-qualified as you believe?

It’s a term that many of us use every day, and one we typically assume means a professional who has completed formal accountancy exams. Research from Chartered Accountants Ireland shows that eight out of 10 Irish people believe that automatic regulation of people calling themselves accountants already exists on our statute books. But does it?

At present, if you are a practising accountant in Ireland, and a member of a professional body such as ACCA, CIMA, CPA Ireland or CAI, you will come under the regulatory oversight of the Irish Auditing and Accounting Supervisory Authority (IAASA). You will thus be subject to conduct of practice regulations, and external inspection (quality assurance).

But this system is voluntary, and even if you’re not affiliated with any of the aforementioned bodies, you can still call yourself an accountant .

According to CAI, there is a “significant” number of so-called accountants operating outside the regulated sector. While some of these may offer perfectly legitimate services, others may have been expelled from such a body for serious disciplinary breaches. CAI has found a case of a man expelled in 1998 for offences including paying client funds into his own firm’s account and falsifying a document from a bank. Convictions followed, and yet he has been found to be still offering services as an accountant.

Chartered Accountants Ireland president Brendan Lenihan describes it as “a glaring omission on the statute book. Our evidence shows that this situation just cannot happen in most major European countries because the law prohibits abuse of the term ‘accountant’ in these countries”.

According to research from FTI Consulting, six EU member states – Belgium, France, Germany, Luxembourg, the Netherlands and Sweden – have such a legal framework in place. Other jurisdictions, including the UK, do not.

To combat abuse of the term by “rogue operators” here, presidents of the main accountancy bodies are engaging with Senators to get support for an amendment to the Companies Bill, which deals with the powers and role of IAASA. They are hoping this will prohibit the use of the term “accountant” by anyone not supervised or approved by IAASA. The Companies Bill is due to go to the Seanad shortly.

Physio or a physical therapist?

You’ve got a sore leg or a bad back and you’re looking for someone to treat your symptoms. Who do you go see – a physiotherapist or a physical therapist? And are you aware of the differing levels of qualifications these professions might have?

Confusion has arisen largely because the two titles are interchangeable in over 110 countries around the world. In Ireland, however, they mean different things, which is why the Irish Society of Chartered Physiotherapists (ISCP) has been lobbying the Department of Health to introduce legislation to distinguish between the two.

In the public sector, only chartered physiotherapists are entitled to work. Typically, a physiotherapist has completed a four-year full-time degree. They will have expertise in skeletal, as well as cardio/respiratory and neurological areas and may be a member of the ISCP.

A physical therapist, on the other hand, will have training in more soft-tissue issues, with little in cardio/respiratory and neurological knowledge. Physiotherapists argue that there can be a huge disparity in terms training and qualifications between the two. Indeed, while physical therapists accredited with the Irish Association of Physical Therapists (IAPT) are required to have a three- or four-year level 7 degree, others can attend a 16-weekend course and still call themselves a physical therapist.

Ruaidhri O’Connor, chief executive of the ISCP, says this recognition would protect the title of physiotherapist and physical therapist in one register and would eliminate the potential for confusion.

“This would ensure that all those providing physiotherapy/physical therapy in Ireland are working to the same standards of care,” he says.

The IAPT would also like the title of its members to be protected. “We’d like to be included in that,” says Terry Christie, professional adviser for the IAPT.

The register – as provided for by the Health and Social Care Professionals Act of 2005 – will be opened shortly, following the appointment of the Physiotherapists Registration Board on May 20th. It will likely take two or three years before it becomes fully operational. At this point, consumers will be able to check the register to understand the qualifications of the person they are being treated by.

How qualified is your engineer?

“If you’re building a house the wiring has to be done by an RECI-registered electrician. But the person who oversees the whole project doesn’t have to be registered with anyone,” says John Power, director general with industry body Engineers Ireland.

At present, engineers class themselves into three levels: chartered engineers (master’s degree); associate engineer (level-seven degree); engineering technician (level-six diploma). However, aside from these terms, pretty much anyone can call themselves an engineer in Ireland.

Think of your local heating engineer, elevator engineer. They may all be qualified in their fields, but may not have the qualifications Engineers Ireland would like them to have. “Anyone who wishes to practise as an engineer should have a level-seven qualification [three-year degree in an institute of technology] or they should not be allowed call themselves an engineer,” says Power.

“There is no protection whatsoever in this country when you hire an engineer unless they are registered with us,” he says. The association has about 19,000 members, while a further 40,000 professionals have the appropriate qualifications but are not registered. Apart from these, anyone calling themselves an “engineer” is unlikely to have the required qualifications.

Power has had experiences of people ringing up the body to complain about engineers, but he would find that they weren’t registered. Further digging would show that they in fact had no qualifications.