Pricewatch: The heat is on – but most of it is escaping

Homeowners can find out if their energy spend is going out the window, thanks to a project in Dublin that is making easy-to-use kits available to borrow 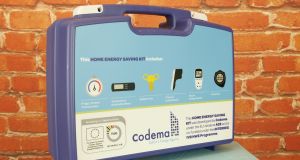 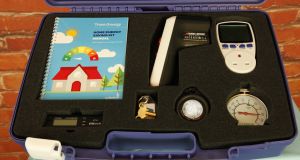 Pricewatch is walking around its house pointing a snazzy-looking laser gun at the walls, the floors and the ceilings, trying to establish if bad things are happening to our energy levels.

To be honest, it’s not looking good.

If the green laser beam turns blue, it means heat is leaking through the walls, ceilings or floors. If it turns red, it means we are wasting money by making parts of the house unnecessarily warm.

There is a lot of blue light as Pricewatch points the laser.

It is one of six tools we found in a Home Energy Saving Kit we were given to try out by Dublin’s local-authority energy agency.

From tomorrow, the kits will be available to borrow at no cost from 10 libraries around Dublin as part of a pilot project aimed at helping homeowners reduce the amount of energy they use and the amount of money they spend.

The kits have been developed by Codema, an energy agency that has become the first publicly funded group in Europe to roll out such a project.

The kits come in a natty, foam-padded suitcase. They include a thermometer for measuring the temperature of fridges and freezers, a humidity meter, a radiator key, a thermal leak detector and a plug-in energy monitor. They also come with a worksheet for data recording and an easy-to-follow guide.

There is also a stopwatch, but we are not really sure what that is for. The first striking thing about the kit is how simple it is. There is no complex cabling. You won’t need to go near your fuse box. You probably will not even have to consult the guide. Even packing the whole thing back up after using it has been made idiot-proof. And idiot-proof things appeal to Pricewatch.

The results of our energy audit are not so appealing.

The kit tells us our fridge has a temperature of five degrees. That is on the warm side but is probably okay, according to Codema’s communications manager, Suzanne Fitzpatrick. The freezer is minus 15 degrees. It could be colder but, again, it’s probably fine.

When it comes to room temperature, the house ranges from 17 degrees to 20. Humidity levels range from 54 per cent to 63 per cent. That seems cold to us, but Fitzpatrick says the house might actually be too warm.

“The ideal temperature for a room you are going to be sitting in is between 18 and 20 degrees. That seems cold, but if you were outside on a summer’s day and you were told it was 20 degrees, you’d probably be thinking it was roasting.

“If you’re not in the room all the time – so we’re talking about the bathroom or a bedroom – you should be looking at a temperature of between 15 degrees and 18 degrees.”

The real problem for the Pricewatch house is revealed by the laser beams, or the thermal leak detector, to give it its formal name. It allows for the very easy checking of internal and external walls, as well as the heat of floors and ceilings.

The internal walls in the living room are 22 degrees and the external walls are 17 degrees. The range is too high and it suggests a lot of heat is leaking out.

Fitzpatrick immediately identifies the most serious issue. “It would appear that the external wall insulation is a problem,” she says. That is hardly surprising, as the house is more than 110 years old and was built at a time when the only insulation ever used – if there was any insulation used – was horse hair.

“You see that a lot in Dublin houses,” she says. “If all the houses in the city were insulated properly, a huge amount of energy and money would be saved. The kit is not going to give you any exact answers as to what the problems might be, but at least it will point you in the right direction and identify where there might be particular issues that need to be addressed.”

The kit is the brainchild of Verena Brennan, Codema’s energy-awareness manager, who was inspired to put it together after coming across a similar scheme in south Australian libraries, which was a success.

“Energy can be perceived as quite difficult to get your head around, as it is intangible and uses measurements that not everyone understands easily,” Brennan says. “However, everyone feels the burden of paying high energy bills.

“We wanted to create something that would make it really easy and engaging for people to get involved in energy savings at home by helping them with some practical first steps on their energy journey.”

As first steps go, it is certainly very positive. The plug-in energy monitor assesses how much it costs to run individual appliances and can be easily programmed to highlight the exact cost of running the tumble dryer (very dear) and the kettle (not so dear, but it all adds up).

“It can really bring home the impact appliance usage has on prices,” Fitzpatrick says. “It might only be a small amount of electricity each time, but if you are using a product over and over again it can make a big difference over time.”

The public will be able to borrow the kits for up to two weeks from public libraries in Ballymun, Raheny, Coolock, Cabra, Rathmines, Ringsend, Terenure. Walkinstown, Henry Street and Pearse Street.

“Ideally, we would like to see this rolled out across the country, but this is a start,” Fitzpatrick says. “It is just a pilot project, and we will see how we get on with that with a view to upscaling it.

“Our target market is anyone who has to pay an energy bill, but I would imagine young families and elderly people, as well as community groups and schools who come into the library, will be the first to discover it. I can also see it making for a very good school project.”

Who will end up using it in the long term? Fitzpatrick says it is for everyone.