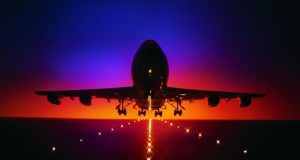 All told, Irish residents spent €1.037 billion on foreign trips between January and March - with the bulk of the spend going on holidays. File photograph: Getty Images

The number of Irish people travelling overseas jumped sharply in the first three months of the year, with 1.3 million outbound trips recorded - up 14.1 per cent on the same period last year.

According to new figures from the Central Statistics Office (CSO), Irish people spent a total of 9.4 million nights outside the country in the first quarter of 2015, with the average length of a trip abroad put at seven nights.

The figures show the UK remains the most popular destination for travel by far with 547,000 trips taken there by Irish people in the first three months of the year.

Spain was the second most popular location with 210,000 recorded trips, while France occupied the bronze medal position with 94,000 trips.

All told, Irish residents spent €1.037 billion on foreign trips between January and March - with the bulk of the spend going on holidays.

The figures show €564 million was spent on holidays, with a further €189 million being spent on visiting friends or relatives overseas and €187 million on business trips.

Domestic travel was also up, although not by as much. Irish residents took 1.4 million domestic trips in the first quarter, up 0.2 per cent when compared to the same period in 2014.

Each trip had an average duration of 2.1 nights, which amounted to three million bed nights in total.

Holidays accounted for 43.5 per cent of all domestic trips, while just over a third were to visit friends or relatives.

Visitors who stayed in hotel accommodation accounted for 643,000 domestic trips, while those staying with family and friends accounted for 504,000 trips.

Total expenditure on domestic trips in the first quarter amounted to €230 million.

Almost €117 million of this was accounted for by those on holidays, while those visiting friends or relatives spent €49 million in the first quarter.