Average capital cost to upgrade to a ‘zero energy’ house is between €30-€40k, committee hears 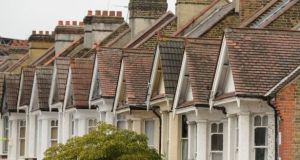 If Ireland did not introduce additional taxes on carbon, ‘it will be eye wateringly expensive’for the Exchequer to ensure Irish houses are retrofitted by 2050,’ Oireachtas committee hears. File photograph: Dominic Lipinski/PA Wire

The vast majority of Irish homes will need to undergo a “deep retrofit” by 2050 to meet targets for reducing CO2emissions while adopting renewable energy – most especially for heating purposes, an Oireachtas committee has been told.

Ireland’s environmental commitments required that homes be “fully decarbonised”, which would only be achieved through “deep retrofit of buildings with renewable heat”, Paul Kenny of Tipperary Energy Agency told the Committee for Communications, Climate Action and Environment – it is reviewing progress on achieving legally-binding climate and energy targets.

“The consequences of not meeting these targets are a legacy for us, and our children contending with migration, floods and all the negative consequences that climate change will bring,” Mr Kenny said in a submission.

With support from the Sustainable Energy Authority of Ireland, the agency (a not-for-profit social enterprise) had retrofitted 75 buildings which were now “zero energy superhomes”, providing all year round heat for between €200 and €300 a household, he added.

Homeowners were of the view that this was the best money they had ever spent. For those with asthma and COPD, renovations were “life changing” from a health perspective.

The catch was the capital cost for the average home was between €30,000 and €40,000, he said. The creation of the business case for Irish householders who wish to do this was absent due to the low cost of fossil fuels.

“This business case can be achieved by a mixture of carrots, sticks (grants and taxes) and low-cost finance,” he added.

But if Ireland did not introduce additional taxes on carbon, “it will be eye wateringly expensive – costing between €10 billion and €20 billion for the Exchequer – to ensure Irish houses are retrofitted by 2050,” Mr Kenny warned.

Some 37 per cent of new homes built last year had heating systems using renewable energy in the form a heat pump, and 63 per cent had “fossil fuel boilers” – the reality was homes in the latter category would have be retrofitted.

Ireland’s offshore wind resource is “one of our greatest untapped [ENERGY]resources” but a clear signal from Government supporting the technology is lacking, Paddy Teahon of the National Offshore Wind (NOW) Energy Association of Ireland told the committee.

Ireland’s location, climate and seabed conditions, “make our waters one of the most suitable locations for offshore wind projects” in the world, while its territory was 10 times its land area and larger in total than Germany.

There was an opportunity to develop a major and sustainable offshore wind industry at no net cost or risk to the Exchequer, Mr Teahon said.

Developing such resources would help Ireland avoid EU for missing targets to increase renewable energy use and reduce emissions; increase energy security and “create a new sustainable indigenous industry for Ireland, comparable to tourism and agri-food”.

Offshore wind was the fastest developing renewable technology in Europe while costs were falling rapidly, he added. The ability to construct large scale projects offshore where land access and environmental constraints were less of a problem than onshore, “means offshore wind offers substantial scale that can be delivered quickly”, Mr Teahon said.

The Government, however, needed to issue a strong and clear policy statement. A signal needed to be sent to relevant government departments in particular, to facilitate granting of offshore licences. There was also a need for “technology-specific” auctions, thereby facilitating State supports for those providing offshore wind energy.

Stephen Wheeler of SSE Ireland, which co-developed in 2004 the Arklow Bank project, Ireland’s first and only operational offshore wind farm, confirmed the Republic had lost its position as a world leader in offshore wind.

It was as a “demonstrator project” to prove the opportunity offshore wind energy could represent for Ireland. “But, nearly 15 years later, that opportunity has not been seized. We have one of the strongest offshore wind resources in the world; yet we are the only country in Northern Europe not currently developing offshore capacity,” he added.

“Onshore technologies have served us extremely well to date, but we must be realistic that social acceptance to onshore energy developments is challenging, and greater grid and planning constraints are now in place,” Mr Wheeler said.

“If we are to make up ground on 2020 and beyond, then we need to fast-forward the build-out of large-scale renewable energy capacity. Offshore wind energy can deliver large volumes of renewable electricity in the short term and also set us on the right trajectory for more ambitious 2030 targets.”

SSE Ireland was progressing plans to fully develop Arklow Bank, an investment of over €1 billion, and deliver a minimum of 520MW of electricity capacity. Post 2020, the potential of large floating offshore wind farms, which were especially suited to Irish waters, would be realised, he predicted.