Irish musicians to take part in Concert for Paris 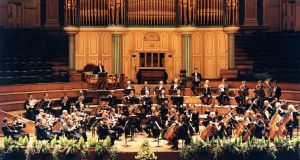 The Ulster Orchestra will take part in a Concert for Paris this Friday.

Hundreds of musicians from across Ireland are to take part in a free concert to mark the attacks in France over the weekend.

The Concert for Paris calls for a “peaceful reaction to international armed conflict” and will have an all-French programme, including Ravel’s Pavane pour une Infante Défunte and Fauré’s Pavane and Requiem.

“We have seen the power of music to influence peace already through Daniel Barenboim and Edward Said’s West-Eastern Divan orchestra, which has succeeded in bringing together members of conflicting communities from Israel, Palestine and other Arab nations,” said Barnardos chief executive Fergus Finlay, who will act as MC on the night.

The free event will take place this Friday at 8pm in St Patrick’s Cathedral in Dublin.

It will involve members of both the RTÉ Concert Orchestra and the Ulster Orchestra, as well as freelance musicians and numerous amateur groups from across the island.

“The programme has been chosen as a reflection of the peace, beauty and catharsis that French music is known for,” the concert organisers said.

“This is a time for members of the artistic community to come together with a focus on healing and empathy,” said concert director John Doyle.

“We live in a time of daily media reports about widespread violence and death. Aggression will not solve this crisis.”