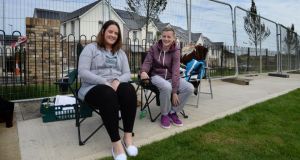 Megan O’Shaughnessy (left) and Shantelle Farrell are the first and second in queue respectively to buy houses at the Millers Glen housing development, in Swords, Co. Dublin, when the properties go on sale on Saturday. Photograph: Dara Mac Dónaill/The Irish Times. 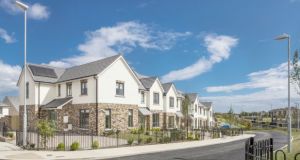 Three or four parties queued overnight at the Millers Glen development near Applewood in Swords in order to secure their places at the top of the queue for 60 newly-built homes launching on Saturday at 2pm.

In a throwback to the crazy days of the property boom, house hunters have begun queuing overnight for a new homes scheme in Swords, Co Dublin, that will not open to the public until Saturday.

Three or four parties queued overnight at the Millers Glen development near Applewood in Swords in order to secure their places at the top of the queue for 60 newly-built homes launching on Saturday at 2pm.

This morning a number of others have joined the queue outside the estate on Glen Ellan road, for two-,three- and four-bed homes priced between €240,000 and €400,000. Developed by Gannon Homes, whose lands comprise the bulk of new homes built in the area prior to the property collapse, Millers Glen is the first major new homes scheme in Swords - and north Dublin - in seven years.

The scheme has been developed by boomtime builder and Maple 10 Anglo investor Gerry Gannon, with funding provided by Nama. It has permission for up to 1,500 new homes, to be built in gradual phases, with phase one starting on Saturday. The unprecedented interest in the scheme reflects the dire shortage of affordable family homes in the capital at present and the competitive level at which the houses are priced.

The houses, 45 of which are three beds, have been built to strict new building guidelines, and as a result are bigger (1,280sq ft) than the average built during the boom, and all come with high A3 energy ratings. The prices of the properties are fixed and will be between €280,000 and €290,000 for three beds, six two beds are being offered for €240,000 each and nine detached four beds are available at €400,000 each.

The selling agent, Ronan O’Driscoll of Sherry FitzGerald said: “Yesterday we sent out an email and letters to people who had made enquiries about the scheme to let them know it was launching on Saturday, and obviously one person decided to bite the bullet and queue and others have followed. The houses will all be sold on a first come first served basis, and when doors open on Saturday we will deal with each party as they come through the gates.”

Mr O’Driscoll will brief those queuing this afternoon, and distribute brochures, but he said he wouldn’t encourage others to queue. The houses will be targeted at family buyers, and Mr O’Driscoll added that they won’t be selling to buy-to-let investors.

The showhouses which comprise the bulk of the properties at the entrance to the estate will not be included in Saturday’s phase one sale.