Has Halloween sold its soul to the consumerist devil?

Although the ancient festival has undoubtedly become Americanised, and shop-bought costumes and plastic tat are now a big feature, many of our traditions go back centuries – and mischief is free 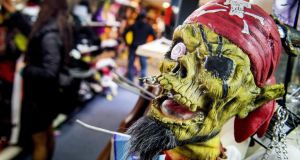 What has happened to Halloween? The ancient festival has gone from being a children’s party to a major event for Irish adults. Last year, we spent about €41 million on Halloween food, costumes and decorations (an increase of €1 million from 2013), according to a survey of 1,500 Irish people for ecommerce firm Webloyalty.

The survey also suggested that Irish people have somewhat ambivalent feelings about Halloween: 64 per cent felt that Halloween was more of a commercial opportunity than a real festival, but even so, only 22 per cent said that it shouldn’t be celebrated at all.

So has the consumerist devil truly stolen Halloween’s soul? Actually, in the grand scheme of the annual Irish consumer spend, €41 million is very little. Dr Bairbre Ní Fhloinn, a lecturer at University College Dublin’s Delargy Centre for Irish Folklore, is sceptical about the notion that Halloween has been captured by commercial interests.

She points out that trick-or-treating, costumes, dressing up, bonfires and house decoration – all popular elements of Halloween today – are far from being American innovations, and seem to have been an intrinsic part of the festival from the outset. Even the rise of Halloween parties for adults, often regarded as a new trend, might be much older, although the idea of buying a ready-made Halloween costume is definitely more recent.

“In the 18th century, adults were going from house to house in disguise, looking for food and money, and it’s clear from various historical accounts that Halloween has often involved some element of pranks and antisocial behaviour,” says Ní Fhloinn.

Halloween seems to have originated in Ireland and Britain, and to have migrated over the Atlantic. It is extremely resilient.

“We know that it was absorbed into American culture and given a new lease of life, but not everyone knows just how old it really is,” says Ní Fhloinn. “There is evidence from an old Irish text, which dates back to the 10th century, that Halloween was recognised and celebrated then. This story, Nera and the Dead Man, has all the themes and atmosphere of a modern Hollywood horror, with the hero, Nera, dared during a stormy Samhain to tie twigs around the leg of a hanged man; and the dead man coming to life and asking Nera to carry him on his back; dares; the returning dead; a scary atmosphere – all the things we associate with Halloween today.”

In research conducted for the National Folklore Collection, Ní Fhloinn and colleagues (including this journalist, a former Irish folklore lecturer at UCD) have been charting how we celebrate Halloween today and how this compares with previous approaches. “In Ireland, it did come to be perceived as more of a festival for children, but the idea of adult involvement, such as going to house parties, is not new; it just lay dormant,” she says.

One big change is that, before the boom years, Halloween costumes were generally made, not bought. How we approach decorations has changed too. Figures from the Webloyalty survey suggest that we spent about €12 million on Halloween decorations in 2014.

Although pumpkin carving has a long history, going back to the folk tale about the will-o’-the-wisp – the soul of a man who wasn’t allowed into either heaven or hell and who lured people to their deaths on Ireland’s bogs – throwing fake spiders and cobwebs around a house does seem to be a newer innovation. It might even be one that’s on the way out, says Ní Fhloinn. “It seems to have climaxed a few years ago; we’re seeing less of it than before. Although my job is to understand rather than judge, I don’t personally like the proliferation of shop-bought ‘Happy Halloween’ signs. Halloween is about death, not happiness.”

The American embrace of Halloween might have helped to keep it alive, but the idea of it appeals to our primal sense because it deals with the ultimate mystery of death and the otherworld, says Ní Fhloinn.

“It is an opportunity to externalise our fears and doubts, and to break away from the normal rules of behaviour,” she says. “It breaks down the barriers between the living and the dead, and between fantasy and reality. It breaks down barriers within communities, as people call to each other’s doors. It even breaks down our ideas of time, with the past, present and future all flowing into one another through recognising the ancestor dead and trying to peer into the future. We don’t necessarily need to spend money for this.”

HALLOWEEN FOR SALE: WHAT YOU CAN BUY AND WHERE

Costumes: At Lidl, you’ll get Halloween costumes for kids, including skeletons, green monsters and black angels, for €4.99, and adult wigs from €3.99.

Accessorize also has a range of accessories for adults, including cat tails at €6 and witch hats for €6.

Cheapest of all is Dealz, where all costumes, including a blood-and-gore zipper mask, fake blood and a monster of Frankenstein mask cost €1.49.

Retailers aren’t the only ones with an interest in Halloween. Because the night falls during the October bank holiday weekend, Fáilte Ireland has been promoting events and festivals for the domestic and international tourist market during this so-called “shoulder season”.

Although it’s hard to get a true measure of the net worth of these promotions to the Irish economy, certain events do bring tourists into Dublin. Among these are IFI’s Horrorthon (October 22nd-26th) and the increasingly popular Bram Stoker Festival (October 23rd-26th), which celebrates the Irish-born author of Dracula with a range of gothic and mysterious arts, food, family, literature, drama and theatre happenings, do bring tourists into Dublin.

In Mayo, the Halloween Fest runs in Westport House, October 24th-31st, aimed mainly at kids and families. The house will be transformed into a spooky place, and there will also be a log-flume water ride.

Galway’s Abooo Halloween Festival (October 24th, 25th and 31st) has a range of themed events, including a parade by street-theatre group Macnas.