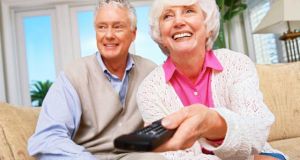 From next February, Bank of Ireland customers must be 66 to qualify for free banking

“The next afternoon, she telephoned me in a very embarrassed state, and explained that the age to reach now for the Golden Years account was 65 – the new rule having come into force the previous day,” he continues. “She told me she didn’t know about the rule change until the form came back to her from another official, and now she had to call and tell me. I explained I wouldn’t be around for my 65th, which, understandably, embarrassed her even more, but with a terminal heart condition the possibility of getting there is slim indeed,” he says.

“So, with little or nothing to lose, I wrote to the bank, asking them to consider again their decision in my case,” he continues. “I may be naïve, but I’m still awaiting a response . At the moment I have a Third Level account as I’ve just completed a three-year degree in DCU, but will have to give that up now that I’m a graduate. “

He does accept that the bank did not have to give him the Third Level account as he was not under 25 at the time “so I have enjoyed free banking for the last couple of years”. He points out that the Golden Years account “was never advertised, and never offered – a customer had to request it from the bank. Likewise, so far as I know, the new threshold of 65 was not advertised either, otherwise I would have made the extra effort to get in before the deadline. As it is, I missed this secret deadline by a few hours. I don’t know if you can do anything about this or not, but at least you could highlight the fact that the bank’s secret age is now 65.”

We contacted the bank to find out more. A spokeswoman confirmed that the bank was moving the age of entry for Golden Years free banking from 60 to 66 years of age from February 2014. She did not given a reason why other than to say it was moving into alignment with the State pension. She did, however, say our reader was misinformed and anyone aged 60-66 will still qualify for the Golden Years account if they apply before next February. She said the bank would be contact our reader directly to clarify things.

The new deal will become automatic when someone reaches 66 as opposed to the current situation which forces customers to apply for the free banking deal.

The daughter of a reader called Lisa was diagnosed with coeliac disease last February and the family has seen its shopping bill increase due to the high cost of gluten-free products. “I learned early on that it is very important to shop around for gluten-free products as the cost of these varies widely between all the large supermarkets,” she says.

“An example of this is Doves Farm Organic Chocolate Stars Cereal 375g being €3.19 in our local Superquinn in Ballinteer and €4.99 in Supervalu in Churchtown,” she says.

“When it was announced that Superquinn would be subsumed by Supervalu I did wonder if we would see such price increases.” And she did. “Last week when shopping in Superquinn I saw that the price of the above cereal had increased to €3.99. I’m sure you are aware it is challenging enough living with coeliac disease without having to live with such rip off prices. Is this a slippery slope?”

Supervalu said there “has been some price increases recently due to factors beyond our control such as the animal fodder crisis, world grain prices, the price of oil. This is the reason behind the change in price for Doves Farm Organic Chocolate Stars Cereal.” It was “highly aware of the needs of Ireland’s coeliac community” and now stocks several own-brand products.

A reader, Sean, was in Lidl recently and noticed something which displeased him greatly. “It is autumn, the season of mist and mellow fruitfulness yet I could find no vegetables which had been grown in Ireland,” he writes. “The company – like all the big retailers – is making much of its commitment to Irish products so what is going on here?”

We contacted Lidl to ask how much of its produce comes from Ireland. This is what we were told. “Today, Lidl has as many as 120 fruit and vegetable lines on sale throughout the store network in Ireland. This number will vary from store to store due to space available for stock and sales of items.”

The spokeswoman said this figure was more than usual “as we have an organic fruit and vegetable promotion on offer to customers all this week. Of the 120 products potentially available to customers, 24 of these are sourced in Ireland. On any given week, the number of Irish fruit and vegetables varies from between 20 per cent and 25 per cent and is subject to a number of factors including seasonality of the item desired and availability within Ireland. At all times, Lidl strives to source Irish where possible.”

Between 20 and 25 per cent. Hmm. If only farming was a big industry in Ireland. Oh, right.