Fairtrade: a fairer payday for some of the world’s poorest workers

Fairtrade Fortnight starts today. But what does the Fairtrade label really mean? Do goods bearing it cost more? And does the concept really make a difference? 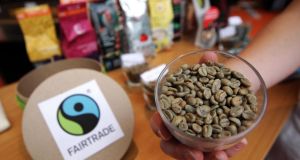 Fairtrade Fortnight? What’s that about?

It starts today and runs for the next – you guessed it – two weeks. There will be talks and events around the country, and the movement is keen to highlight the benefits of fairer trade to people living and working in the developing world.

This year Fairtrade Ireland is calling on Irish supermarkets to step up and match much better-performing retailers in the likes of the UK, Switzerland, Germany and Sweden.

Our retailers are not into Fairtrade then?

They are not as committed as you might think. Take bananas. Less than 10 per cent of that fruit on supermarket shelves in the Republic is Fairtrade. In the UK, 35 per cent of the banana trade is Fairtrade; in Switzerland it climbs to 50 per cent. In Germany, sales of Fairtrade roses account for more than 30 per cent of the market; in Ireland the figure is closer to 1 per cent.

What is Fairtrade again?

It is about better prices, better working conditions and better lives for farmers and workers in the developing world. If companies based in the well-heeled world want to use the Fairtrade logo to sell their products to well-intentioned consumers, they have to pay prices to producers that can’t fall below market prices.

Using this simple mechanism, many of the injustices of conventional trade, which discriminate against the poorest, weakest producers, can be countered by allowing some of the world’s most impoverished growers and producers to improve their position.

So it’s charity then?

No. And the movement would not like to be regarded as such. Instead, Fairtrade is about promoting positive and long-term change through trade-based relationships. To succeed, the movement needs independent, successful organisations and businesses, and it would not function if it was to focus on charity.

How can you tell if something is Fairtrade?

It carries a label. The label shows that a product has been certified to offer a better deal to the farmers and workers involved. It does not endorse an entire company’s business practices.

What kind of impact can it have?

That’s a lot of numbers.

It is. But we can take you behind them too. Last year, Pricewatch travelled to the Sorwathe Tea Plantation, 90 minutes from the Rwandan capital of Kigali. Sorwathe produces three million kilograms of black tea, employs 2,500 people directly and buys tea from 4,500 local farmers. It is the only certified fair-trade tea producer in Rwanda. Life is hard for people working the fields harvesting tea leaves, but it is much better than it might otherwise be.

The factory has used money raised through the Fairtrade concept to build preschools, water-purification projects, hospitals and computer labs.

Where are the producers?

What kinds of food are Fairtrade?

Most Fairtrade business is generated by seven products: bananas, cocoa, coffee, cotton, flowers, sugar and tea. Other products include vegetables and even wine.

You can buy Irish and buy Fairtrade?

There are a few Irish companies that are both big employers and big supporters of Fairtrade. Bewley’s, Insomnia, Robert Roberts, Java Republic and Smyths Food have all displayed a commendable commitment to Fairtrade commodities such as bananas, coffee, cocoa and cotton.

Ireland has the highest per-capita spend on Fairtrade in the world. Research shows that 85 per cent of Irish consumers trust the Fairtrade mark. Estimated Irish retail sales for Fairtrade in Ireland were €174 million in 2012, €197 million in 2013 and more than €200 million last year.

According to the 2015 Eurobarometer report, Irish people ranked second only to Sweden in their belief that individuals play a role in tackling poverty in developing countries, and 89 per cent think companies can reduce poverty by doing business in a better way.

But Fairtrade is dearer, right?

Not necessarily. The real financial difference is at the point of sale between the grower and the supplier, not at the final selling price. It can make a massive difference, but consumers in this country would scarcely know the difference. According to the organisation, “most Fairtrade products are competitively priced in relation to their conventional counterparts. Fairtrade organisations work directly with producers, cutting out middlemen, so they can keep products affordable for consumers and return a greater percentage of the price to the producers.”

What has Harry Potter got to do with anything?

A four-year battle to get Warner Bros to use only Fairtrade-certified chocolate in all boy-wizard-branded chocolate came to an end a couple of week ago. The Harry Potter Alliance, which includes author JK Rowling among its members, got together a 400,000-strong petition arguing that Harry would not approve of unethically produced chocolate.

“If ‘Harry Potter’ [as a franchise] were to be in alignment with the values of Harry Potter [the character], it could be a real symbolic and coherent victory,’ one of the campaign organisers told the Washington Post.