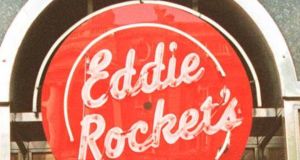 Eddie Rockets in the Bridgewater Shopping Centre in Arklow, Co Wicklow, was one of nine businesses served a closure order by the Food Safety Authority of Ireland last month. Photograph: The Irish Times.

Nine food businesses, including two kebab shops next door to each other, a Chinese restaurant, a grocery shop and an Eddie Rockets outlet, had closure orders made against them last month.

The orders were issued by HSE environmental health officers for breaches of food safety legislation, under EU and domestic legislation.

One prohibition order was also made by Mayo County Council’s veterinary inspectors against Gerry Joyce Meats, a small meat manufacturing plant in Castlebar.

There were also five successful prosecutions taken last month, one in relation to the sale of counterfeit vodka.

In a statement issued on behalf of the Arklow franchise, Eddie Rockets said the diner was closed for a “very brief time” due to the closure order. The order was served “due to a slight temperature inaccuracy” in one of its fridges”, which was immediately fixed, it said. The diner reopened the next morning.

“We have rigorous food safety measures in place at the diner, all of which are checked on a daily basis,”it said.

A closure order is issued when there is likely to be a grave and immediate danger to public health at or in the premises. The food safety issue or issues must be remedied before the business can open again.

Five further closure orders were issued under the EC Control of Foodstuffs regulations, against the Swan Bar, in Swanlibar, Co Cavan (for breaches in its old bottle and ice-store room); a Spar outlet on Douglas Street in Cork (for breaches in its delicatessen area); a premises used for fruit and vegetable processing at Cloughans Crossroads, Delvin, Co Westmeath; the Adana Char Grill, Cormarket Row, Limerick, and, the Long Thanh take-away, North Strand Road, Dublin 3.

The business pleaded guilty and was convicted of four offences. They were making a false statement to an authorised officer, selling below-strength vodka, misleading consumers about the vodka and failing to provide information about where the vodka came from. Fines of €7,000 and costs of €2,000 were imposed.

FSAI chief executive Prof Alan Reilly said it was not acceptable for any food business to potentially put their customers’ health at risk.

“We’re urging food businesses to make sure that they have a food safety management system in place and that it is consulted on a regular basis and updated, where necessary, to ensure non-compliance issues and breaches of food safety legislation don’t occur.

“We would encourage any food business operator who is unsure of what is legally required of them to contact us through either our advice line on 1890 336677, our website www.fsai.ie or our Facebook page.”