National residential prices were up by 6.1%, latest CSO figures show 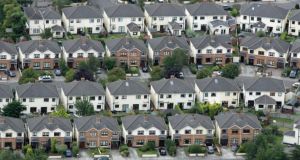 In Dublin, prices grew by 2.3 per cent last month and are now 15 per cent higher than they were a year ago. Photograph: Frank Miller/The Irish Times

Property prices across the country have climbed dramatically over the past 12 months, with an increase of more than 6 per cent recorded nationally and more than 15 per cent in Dublin, according to the latest official figures.

However, industry experts have cautioned that the market is still dysfunctional, with low levels of transactions and a shortage of supply in some areas putting unrealistic pressure on prices in some urban areas.

In Dublin prices grew by 2.3 per cent last month and are now 15 per cent higher than they were a year ago.

The CSO cautioned that the apartment figures were based on “low volumes of observed transactions and consequently suffer from greater volatility than other series”.

The emergence of a two-tiered property market is continuing and the pace of growth outside Dublin is not as significant.

While the price of residential properties outside of Dublin rose by 1.5 per cent in October, year-on-year prices are down marginally by 0.3 per cent.

House prices in Dublin are now 48 per cent lower than they were at their highest level in early 2007.

Apartments in Dublin are 56 per cent off their boom-time peak in February 2007.

The fall in the price of properties in the rest of Ireland is somewhat lower at 47 per cent.

Overall, the national index is 47 per cent lower than its highest level in 2007.

“The upturn is certainly apparent, but we’re a little more circumspect on the magnitude of the appreciation in house prices. The index covers mortgage transactions, of which there have been very few this year.”

Angela Keegan of property website myhome.ie said the new figures “reinforces the fact there is a shortage of stock in many parts of Dublin”.

She said the website, which is owned by The Irish Times, has 3,200 Dublin properties for sale compared with almost twice that number at the beginning of last year.

“The current level of transactions is far too low. Many people are holding on to their tracker mortgages rather than upsizing and that is acting as a brake on the market. But it’s clear we need to see more new developments coming on-stream” Ms Keegan added.

Simon Stokes of the Society of Chartered Surveyors Ireland, which represents estate agents and valuers around the country, expressed concern over a 7 per cent decline in transactions in Dublin between October and September.

“While we have seen a small increase in residential building activity in Dublin in recent months, unfortunately it is nowhere near a level that would satisfy the current market demands,” the Construction Industry Federation’s director of housing, Hubert Fitzpatrick said.

“Based on the current demand for housing, we would need to see four times as many houses being built in Dublin on an annual basis,” Mr Fitzpatrick added.