Downwardly mobile: the plunge in standards of living

Growing income inequality combined with austerity, precarious jobs and an eating-away of middle-class security are all having a negative effect on social and economic mobility 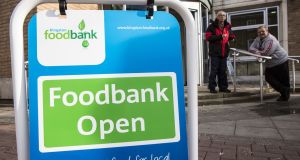 A food bank in the UK. Photograph: iStock

Across the West, austerity is the new norm and social mobility seems to be slowing down or even going backwards. These were big factors behind Brexit and the rise of Donald Trump.

Figures from Credit Suisse show that the richest 1 per cent in the world now have more wealth than the rest of the world put together. In Ireland, more than a third of all income is held by the top 10 per cent of earners, according to research by economic think tank Tasc. The research also found that Ireland has become the EU’s most unequal country in terms of income distribution, before adjustments for taxes and welfare payments.

A 2012 study in the European Journal of Business Research said that barriers to wealth, and limits on purchasing power, have a negative effect on careers, as well as social and economic mobility. In other words, it hits the consumer.

“Income inequality is not just bad for people on the very lowest incomes, who get left behind,” says Jim Clarken, chief executive of Oxfam Ireland. “It’s also bad for overall growth levels and the duration of growth spells. Across the world, ordinary working families are up against the odds.

“While the size of the global economy has more than doubled over the past 30 years,” Clarken says, “the share of income going to workers has been declining in rich and poor countries alike.”

Irish inequality can’t be looked at in isolation. Although India, for example, has emerged as an economic powerhouse, Oxfam points out that 400 million of its citizens live in extreme poverty. In Zambia, one of the fastest-growing economies in the world, rural poverty persists and overall poverty rates have increased. In Brazil, by contrast, a focused investment in health, education and social protection has largely protected those on the bottom rung.

The quality of employment

Caroline Fahey, social policy officer at the Society of St Vincent de Paul, is looking to the future.

“Previously, people who might have low earning potential had access to social housing, so they could still work full-time and support a family,” she says. “Now we have less social housing. On top of this, the quality of employment has changed from full-time to low pay, insecure jobs, often on zero hours, where workers have to be available at all times, which caps their opportunity to secure more work. And precarious work is spreading in more professional sectors, such as academia and the media.”

Fahey says people who were quite comfortably middle-class a decade ago but fell into debt or bankruptcy during the recession are using SVP services. “People on middle incomes are facing increased costs as well. For instance, college fees or loans are on the cards, which will increase education costs.”

June Tinsley, head of advocacy at Barnardos, also says they are seeing families from a diversity of backgrounds. “While our focus is in areas of disadvantage, we are also seeing families who were once better-off but may have lost the family home or business, and are managing huge changes in their lifestyle.”

What are the consequences of this slowdown in social mobility? “When resources are limited, it is harder for people to take risks, such as setting up their own business,” says Fahey. “If childcare is unaffordable, you can’t work, or you have to severely limit your hours and your career chances. If you return to education, there are limited supports and there’s a cost beyond fees: you’re out of the workforce. Transport costs can also eat into incomes and limit opportunity.”

Figures from 2014 show that, of all people in receipt of rent allowance, just 4 per cent are 65 or over. This may be about to change, says Fahey.

“Home ownership is becoming more difficult, but there is not enough social housing. Renting is expensive and insecure, but people have no choice. Will today’s tenants still be renting when they are pensioners, living under insecure leases and having to move around if the rent goes up? This could put huge pressure on pensions.”

When money is tight, extracurricular activities – swimming, dance classes, summer camps – may have to be denied to children; this means less academic children can lose the chance to develop other skills and intelligences.

“If programmes are cut and kids don’t have an outlet for sports or arts, it does impact on their development,” says Tinsley. “Poverty is a denial of opportunity.”

This all seems very bleak. Is there any light? Fahey argues we can make policy choices to prioritise public services over tax cuts, and that free primary education would make a bigger difference than a few euro a week in cuts to the universal social charge.

“Public services, including health, education, childcare and arts programmes, are the ways to break cycles of poverty and disadvantage,” says Tinsley. “We need more support for parents and parenting. The extra supports for Deis [disadvantaged] schools give children a fighting chance, but well over half of children from disadvantaged backgrounds don’t attend a Deis school. If supports are not there, kids are on the back foot as they progress through the education system.

“It’s better to tackle problems before they arise, rather than constantly being in crisis mode.”

BARE MINIMUM: HOW MUCH TO GET BY?
Last month the Vincentian Partnership released a study into the minimum essential standard of living, covering a basket of more than 2,000 goods and services vital to a household’s minimum needs. The study found that the basic cost of living – including rent and childcare costs – has risen 7.7 per cent since 2010, including 3 per cent in the past year.

A single adult living in Dublin requires a gross salary of €515 per week to afford a minimum essential standard of living (more than 56 hours of minimum-wage employment). A two-parent household with one child in primary school and another in secondary school needs at least €565 per week in an urban area and€653 in a rural area (transport costs account for the bulk of the difference).

Private renters need to earn €14,000-€24,000 more per annum, depending on whether they are in a relationship and how many children they have. Falls in the cost of many goods and services, including oil, have been offset by rises in education, health and insurance. Teenagers are particularly expensive to keep. In most cases, social welfare doesn’t cover the difference.