Don’t let Christmas get on top of you: an A to Z guide for consumers

Buying presents for everyone. A potential ESB blackout. The shrinking contents of a Quality Street tin. The festive season is enough to drive anyone crackers

Conor Pope reviews four advent calendars, from the chocolatey to the long-term investment. 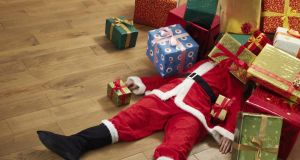 The spectre of Christmas presents: Think about who you’re buying for and ask if it is worth it. If not, contact them and suggest a joint embargo – in a light, jolly way – and chances are they will be delighted. Photograph: Getty

Advent: ’Tis the season to be Christian – or at least that is what Advent is supposed to be. It has been hijacked by everyone from Homer Simpson to Peppa Pig and used to flog seasonal sweets to children through the medium of calendars – some of which are selling for more than €50. When did this happen? And since when did Advent last 25 days, as all the calendars claim it does? It actually starts on the fourth Sunday before Christmas, which was yesterday.

Bubbly: Do you need to spend more than €50 on Bolly or will cheap sparkles do just as well? No and yes. There is no good reason for spending that amount on a bottle of alcohol. If you shop smarter – look out for Cremants rather than Champagne, and don’t turn your nose up at the pink fizz from Jacob’s Creek – you will have a jollier, cheaper season.

Crackers: Don’t spend too much on crackers these. You can get boxes for €5 or for 10 times that much. While the trinkets in the pricey option might look better and the hats will be sturdier, a shoehorn is a shoehorn. And the paper hat is for Christmas, not for life, so flimsy is fine.

Dinner: Once you have munched your way through the turkey, ham, biscuits, mince pies, rashers and sausages, melon, plum pudding, trifle, fancy cheeses and Quality Street on Christmas Day you will have taken in about 6,000 calories. Add a few glasses of wine and half a bottle of Baileys, and your intake will have topped 7,000. This is more than three times an adult’s recommended daily calorie intake.

ESB: Are all the unions working at ESB really going to strike this Christmas? We can’t think of a better way for them to alienate customers than by making fairy lights across the land go out.

Festivus: This alternative to Christmas – made famous by George Castanza in Seinfeld – allows you to let your family and friends know how much they have disappointed you throughout the year. It is the perfect antidote to all that good cheer for Ebenezers everywhere.

Goose fat: The fat from the goose is another relatively new thing in Irish homes, thanks mainly to Jamie Oliver. Foodies insist it makes the best roasties becase it gets hotter than other oils. The real trick, however, is semolina. Parboil your potatoes, liberally dust them with semolina and they will taste amazing.

Holly: Do you take it from the wild? Or buy it? We hope the latter.

Ice cream: Has to be Vienetta – the perfect Christmas day dessert and a lot lighter than pudding and cake.

Jumpers: What is with festive jumpers? A few years back, they were rarely seen, and an amusing novelty as a result, but now
there are pop-up
shops all over the place offering ridiculously festive scenes in wool. Stella McCartney is designing the things and Selfridges in London opened a special Christmas jumper shop this year. The dearest jumper cost €800. We blame Ryan Tubridy.

Kris Kindle: By far the best and most economical way for adults to exchange gifts. Be generous with your spending ceilings though. Instead of spending €20 on eight people, spend €80 on one. That way everyone gets one nice present instead of eight bad ones and everyone has cut their present budget in half.

Lights: Time was when Irish trees would be bedecked with one or two sets of feebly flickering lights that would have to be untangled and then repaired by stressed-out parents. Now, with prices of outside lights falling, Irish houses flashing like Vegas casinos are becoming the norm. Top tip: buy your lights for next year on December 27th and you’ll save a fortune.

Mass: A survey last week found that there were more than 5,000 searches for the phrase “Mass times” on Google in Ireland last December. And how often was it searched for in January? That’d be none.

O Holy Night: We defy anyone to name a better Christmas carol. Impress people with this fact: the first AM radio programme was broadcast by a Canadian inventor, Reginald Fessenden, on December 24th, 1906. He did not invent the radio, but he was the first to discover that by combining two frequencies together, radio waves could broadcast something other than Morse code. The second song he chose to play on day one was O Holy Night. He played it himself, on the violin. The first song was by some guy called Handel.

Presents: Do you really need to buy all those presents? Think about who you’re buying for and ask if it is worth it. If not, contact them and suggest a joint embargo – in a light, jolly way – and chances are they will be delighted. They don’t want to waste time and money buying you a present either.

Quality Street: The quintessential Christmas chocolate. If you find yourself making your way through a tin faster than last year, don’t be too hard on yourself: the purple tins were reduced in size by 18 per cent last year. Has the price fallen? No. Bah, humbug.

Resolutions: No need to worry about these things right now. All that palaver comes later.

Stamps: Don’t bother with them. Christmas cards are dear, environmentally unfriendly and, with social media taking over the world of communication, an anachronistic way to tell friends you’re thinking of them.

Turkey: Don’t buy a smaller turkey – it might cost less but it is a false economy. A much higher proportion of what you’re buying is bone when you buy the smallest fowl on the farm. The bone structure of a 6.35kg turkey and a 3.2kg turkey is pretty much the same, so you get more meat when you go large. True, you might be sick of it by December 27th, but vary the meals you cook with it and stick the rest in the freezer. You might be glad of it come the middle of January.

Under the mistletoe: Does anyone really get kissed under these things?

Virgin birth: It is what the whole thing is about after all.

Wrapping paper: It is only going to get ripped to shreads within seconds.

Xmas: Unless you are composing a particularly brilliant tweet that will go over the 140-character limit without this abbreviation, there is no good reason for it.

Yuletide: Yule be familiar with the word but do you know where it comes from? Yule was a German festival to the god Odin and the pagan Anglo-Saxon Modranicht.

Zzzzzzzz: It is what most right-minded people will be looking forward to the most before Downton Abbey comes on.

THE SEASON TO BE FRUGAL: READERS’ TIPS

Last week we asked Twitter for some festive money-saving tips. These are the best it came up with:
l Keep the Christmas cards you get. The next year write “and the same to you” on them and send them back. Jim Daly
l Don’t go mad spending, if you get paid before Xmas (like me), you’ll be waiting six weeks after that for January’s pay cheque! Rebecca Meehan
l Alienate friends and family in early December. Paula McGrath
l Only date girls called Carol, Holly or Eve. Chances are their birthday is around Christmas so you only have to buy one present. Anthony Lawless
l I baked cookies and cakes last year. Not for everyone but Christmas shouldn’t be about presents – at least not for adults. Catherine Allen
l Have conversations with any adults you’d usually buy presents for, they may well be just as grateful to give it a miss this year. Fiona Hanley
l If you’re meeting the rels and in-laws between Christmas and New Year, shop in the sales. Loads of time on the 27th & 28th. Kieran Sammon
l Iron & reuse wrapping paper. Kate Cassidy