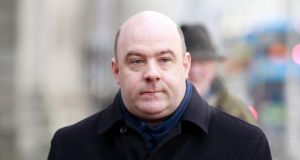 David Hall of the Irish Mortgage Holders Association who last night called for the Central Bank to be stripped of its consumer protection role. Photograph: Collins Courts

Lobby groups and groups supporting people struggling to pay their mortgages have expressed disappointment and anger at the Central Bank’s new code of conduct on mortgage arrears.

David Hall of the Irish Mortgage Holders Association last night called for the Central Bank to be stripped of its consumer protection role.

He welcomed the change of the moratorium on legal proceedings from two to three months and eight months but said that was only “a tiny glimmer of comfort”.

He pointed out that “there are already 53,000 people outside of that moratorium period so why did the Central Bank not just make an attempt to deal with those people first before pushing others into serious difficulties too? The only function of the new moratoriums is to threaten and harass people,” he said.

He suggested the bank could have imposed more proscriptive measures. “It could have insisted that if someone was to be taken off a tracker mortgage they would have to be offered a debt write-off of at least 40 per cent.”

Dictating deadlines
He also criticised the Central Bank for allowing lenders to dictate what deadlines people would have to meet.

“Control over the timeline is going to be the bank’s greatest tool. They can now give a person just four weeks to complete a Standard Financial Statement and if they fail to meet the deadline, then they will be deemed to be non-compliant,” Mr Hall said.

“The Central Bank could have controlled those timelines but instead it had ceded control to the lenders.”

Mr Hall ridiculed suggestions that the banks had a range of alternatives it was making available to distressed borrowers. “There is no suite of offers out there. The Central Bank is not compelling the banks to put certain offers on the table and it still hasn’t defined what sustainable means. This will be cause of great concern to many borrowers.”

Paul Joyce of the Free Legal Advice Centre (Flac) also expressed disappointment with the final draft of the code. “This is not a good deal for borrowers,” he said. “Increasing the moratorium from two to three months will make no difference to many people.”

“This is very disappointing given the time and effort we spend putting into our submission and I am sure others will feel equally disappointed. It all looks pretty bleak unless lenders are pragmatic and write down mortgages and how likely is that at this stage?”