Breast is best as Irish buyers flock to chicken

Sales of chicken have rebounded after the recession and global food safety scares, and cheap poultry has become a loss leader for retailers 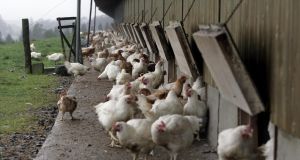 Less than 10 years ago the writing seemed to be on the wall for chickens. They weren’t facing extinction, but the knives were out and they weren’t being used for carving.

Stories of chicken breasts from Thailand being augmented with water before getting gas flushed in Holland and lightly dusted with breadcrumbs in Ireland and relabelled as Irish featured on these pages too.

Fast-forward a decade and the poultry sector seems to be in a better place, not least because of all the bad press other food products – such as processed pork and chargrilled steak, to pick just two – have attracted in recent times thanks to reports linking them with cancer.

The problems that beset the poultry industry back then have not gone away, but the sector seems stronger than ever and our appetite for chicken has yet to be sated. Three million battery chickens are sold in Ireland each week, as well as 65,000 free-range chickens. About 6,000 chickens are corn-fed and fewer than 1,000 are organic.

The poultry market here will grow by about 4 per cent over the next 12 months, with Irish adults consuming more than 30kg of chicken – that is more than 220 chicken breasts per person.

And make no mistake, it’s chicken breast we want. Other countries in Europe are happy to eat the dark meat from the legs and wings, and the Chinese delight in munching on chicken feet, but we are much fussier; here, breast outsells the rest by a factor of about 20 to one.

Roast chicken remains one of the nation’s favourite meals, according to Bord Bia, which is handy, as they can now be bought in supermarkets for less than €3 as retailers recognise that offering cut-price chicken is one of the most reliable ways to drive footfall.

Cheap chicken has not been welcomed across the board. Writing in this newspaper last month, the editor of the Farmers Journal, Justin McCarthy, said Irish chicken, “produced to the highest standards in the world”, now costs the same as “a cup of coffee or a large chocolate bar”.

He said the move “to aggressively devalue consumer price expectations for chicken will have serious consequences not only for the poultry sector but the entire Irish livestock sector and he added that the “reality is that offering a chicken for €3 is merely a marketing ploy. It is designed to attract consumers into stores and expose them to higher-margin products.”

That is undeniably true, but an obvious question prompted by such a statement is: so what?

Vincent Carton of Manor Farm foods, the second-largest chicken processing company in Ireland, insists retailers, not producers or farmers, take the hit when it comes to the heavy discounts.

“It is a profitable product for the farmer and the wholesaler,” he says. “At the retail level the competition is fierce, and chicken is seen as a real volume driver. Our farmers do not take any reductions during promotional periods and they get the same price throughout the year. And that is the same across the industry.

“We say we are joined at the hip with the farmers and the relationship is really important to us. The business is growing at a rate of between 2 and 3 per cent, and we need more farmers. It is that simple.”

It is far from €3 roasting chickens Ireland was reared. Carton’s family has been steeped in chickens for more than 200 years and has been in the poultry business since the 1770s. The Irish chicken has come a long way since then.

Until the 1960s, Ireland was a “spent hen” market: the vast majority of the chickens consumed were old hens who could no longer lay. The meat from such birds tended to be tough, and the best way to make it edible was by boiling it.

There was one exception. Spring chickens could be roasted, but – as with spring lamb – they were a rarity and “incredibly special”, Carton says.

In the 1960s, production methods were dramatically overhauled, which gave us spring chickens all year round.

“That was when the other big change in the Irish chicken market happened, and demand for breast meat skyrocketed,” he says. “Today, for every 21 breasts we sell, we sell one leg.”

Our changing tastes led to the birds changing too. Right up until the 1960s, the most common chickens were suited to the relatively cold climate in northern Europe. They had big legs and smaller breasts. It wasn’t ideal for the Irish consumer of the 1970s and beyond, so producers looked to jungle fowl from warmer climates, which had bigger breasts – due to more flapping – and were quicker to mature. Today 85 per cent of the DNA of an Irish chicken is borrowed from imported jungle birds, according to Carton.

“Not only can I tell you how the economy is doing, I can also tell you the number of people from eastern Europe in the country and how many have left. The amount of dark meat we sell is a clear indicator of that,” he says.

In April, new mandatory country-of- origin labelling rules were introduced, and now only chickens born, bred and slaughtered in Ireland can be called Irish – at least in the retail trade. The new labelling legislation doesn’t apply to restaurants, cafes or delis, where as much 90 per cent of chicken served is imported.

Typically, the meat in prepackaged sandwiches comes from Thailand, while frozen chicken comes from Brazil and a lot of the fresh chicken breasts come from eastern Europe, where producers have a surfeit of white meat and sell their surplus to the Dutch at heavy discounts.

Typically, these breasts are put into 25- fillet trays and gas flushed – a process that sees much of the oxygen removed from the packaging and replaced with other gases. It adds between two and four days to a chicken breast’s shelf life and is designed to be sold into the catering trade but can often end up decanted and sold as fresh at butchers’ counters.