Consultation meetings to be held ahead of Phoenix Park gigs 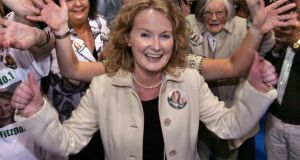 Fianna Fáil Councillor Mary Fitzpatrick - chair of the Dublin Central Joint Policing Committee - said tonight she understood the proposed acts are The Killers, Mumford and Sons, and Justin Timberlake would play at the Phoenix Park this year. Photograph: Matt Kavanagh.

The Office of Public Works (OPW) is to hold a series of consultation meetings for members of the public ahead of concerts proposed to be held in the Phoenix Park this summer.

The move is part of a series of new security measures after last summer's Swedish House Mafia concert was marred by some of the worst scenes of public disorder ever witnessed at a music event in Ireland.

Six people were stabbed and 40 were treated in emergency departments. There were more than 30 arrests for knife attacks, public order offences, drug possession and drug dealing. Two men who attended the concert died afterwards from suspected overdoses.

Promotion company MCD - who were behind the Swedish House Mafia concert - have applied to hold three outdoor concerts in the Phoenix Park on July 9th or 11th, 13th and 14th. The capacity for each of these proposed events is approximately 40,000.

Fianna Fáil Councillor Mary Fitzpatrick - chair of the Dublin Central Joint Policing Committee - said tonight she understood the proposed acts are The Killers, Mumford and Sons, and Justin Timberlake. This is yet to be confirmed by MCD however.

Cllr Fitzpatrick said she had brought together the event organisers, the gardaí, the Dublin City Council Special Events licensing Officer and the OPW to "address the public's serious concerns".

"Like most people I do not forget the mayhem that occurred last year when Swedish House Mafia played and public order was greatly disrupted by anti-social behaviour and crime.

"Following on from this a number of recommendations were made and changes agreed to protocol and procedure for such events."

At the meeting of Dublin Central Joint Policing Committee, Chief Supt Declan Coburn confirmed that the new security and public order protocols are in place and will be adhered to if any concerts are held in the Phoenix park this summer.

The OPW Events Committee will hold two information and consultation meetings on March 21st at Ashtown Visitor Centre, in the Phoenix Park at 7.30pm. A further meeting will take place on March 25th at the same venue at 7.30pm.