Union members vote to accept proposals by 79% to 21% 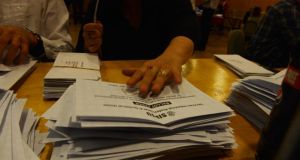 While Batu voted to accept the Haddington Road agreement, Siptu, whose members voted against Croke Park II, will set out the result of its ballot on Thursday. Photograph: Cyril Byrne

The construction union Batu has become the latest to accept the proposed new Haddington Road agreement on public service pay.

Members of the union, which represents bricklayers, stonemasons and carpenters as well as craft supervisory grades in the public service, voted to accept the proposals by 79 per cent to 21 per cent.

On Monday primary school teachers voted decisively to back the proposals, a move which represented a significant boost for the Government in its aim of reducing its public service pay bill by €300 million this year and by €1 billion by 2015.

Overall the fate of the proposed Haddington Road agreement on public service pay will become much clearer by the end of the week with a number of key unions scheduled to announce the results of ballots of their members on the deal.

The country’s largest union, Siptu, whose members essentially killed off the Croke Park II proposals last month when they voted to reject them, will set out the result of its ballot on the deal on Thursday.

Decision due
On Friday the Garda Representative Association, the Irish Nurses and Midwives Organisation and the Psychiatric Nurses Association, which were key elements of the 24/7 alliance which opposed the Croke Park II accord, will announce their stance on the deal.

The decision by members of the Irish National Teachers’ Organisation to accept the Haddington Road proposals means that the united opposition that existed in the education sector to the Croke Park II proposals has been broken.

One union, Unite, has rejected the Haddington Road proposals in a ballot of members. However Unite represents only about 6,000 members in the public service.

Rejected
The big difference between the voting on Haddington Road and on the rejected Croke Park II proposals is that on this occasion each union will have to make its own decision on the deal. There will be no overall decision of public services unions, based on an aggregate of their individual ballots.

The Government has maintained that where unions reject the Haddington Road proposals, it will unilaterally impose measures under emergency legislation passed several weeks ago, to deliver the savings in the pay bill it is seeking.