22 children got into difficulties while kayaking this morning 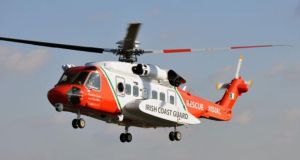 The Coast Guard responded to a second incident on Lough Derg in less than 24 hours this morning when a group of around 22 children got into difficulties while kayaking.

At around 10.30am the Valentia station received a call for assistance from a fire officer at the scene after a change in weather conditions raised concerns.

It follows yesterday evening’s incident in which a group of international rowers got into difficulties on the lake, again due to deteriorating weather.

The children involved in this morning’s brief operation were thought to be Cub Scouts aged between eight and ten years.

There were around 22 children on the water being supervised by two safety boats which ultimately proved successful in guiding them ashore. They were not thought to be far from land when the weather closed in.

The Coast Guard said conditions at the scene were poor.

The Killaloe life boat was dispatched but was almost immediately stood down when it became clear the situation was under control. The Shannon based rescue helicopter was also primed to respond but was not required.

Meanwhile some 70 recreational rowers from a number of countries were recovering this morning after last night’s intensive search and rescue operation. .At least 15 people were reported to have been treated for hypothermia, but all crews from a total of 18 craft participating in the final leg of the 2013 FISA World Rowing Tour, held for the first time in Ireland, were accounted for by 9.30pm.

An extensive search and rescue operation began after boats got into difficulty at the narrowest pont of the lake in bad weather, and were scattered.

Some boats were swamped, some managed to beach at various points around Crow’s island, but one boat with five crew on board was missing for several hours before it was located on the island and gardaí confirmed that all were safe.

RNLI Lough Derg lifeboat coxswain Peter Clarke said that the initial situation on the lake last evening was “very confused”, with low cloud, rain and poor visibility hampering the search for the rowing fleet. The alarm had been raised when Valentia Coast Guard received a call from a member of the public who had spotted a boat in difficulty and beaching at about 5.30pm.

Mr Clarke and crew Ger Egan and David Moore responded to the request for assistance and launched at 6.20pm, when it was confirmed that a number of the touring rowing craft were in difficulty at Palmer’s Point, the narrowest part of the lake.

Some 18 craft with a crew of five in each had left Terryglass to row a 43km distance to Killaloe, but four boats turned back due to the conditions.

Wind was westerly force 4 but with squalls, and pyramid waves at Palmer’s Point swamped a number of the 14 craft which had continued. An escort vessel could only see three boats at any one time due to the poor visibility.

Mr Clarke and crew conducted a number of search patterns to try and make contact with all of the rowing craft, some of which had been swamped and were then taken under tow and some of which managed to beach on the lake shore.

Concern mounted when 13 craft had been located but one was still missing, he said, and the response was stepped up.

RNLI Lough Derg medical oadviser Peter Hooker took his own boat with lifeboat volunteer crewman Dom Sharkey up to the northern end of the lake.

RNLI Lough Derg lifeboat spokeswoman Eleanor Hooker said that lake conditions were such that they could change within an hour. Palmer’s Point is the narrowest and deepest point, and wind funnelling through can create a confluence of pyramid waves, Irish Water Safety chief executive Lieut Cdr John Leech explained.

It appears that there was only one marshal boat with the 14 craft. The crews were not required to wear lifejackets, apart from the coxswain, but buoyancy aids are normally stored in this type of craft.

The week-long event was hosted for FISA in Ireland by St Michael’s Rowing Club of Limerick.

Father of five Irish citizen children wins appeal over refusal of citizenship 22:56
Wearing face coverings in shops to be made mandatory in England 22:40
Frank Lampard says Chelsea players are too quiet on the pitch 22:30
Players’ shirts will no longer sport bookies’ logos, says MP 22:30
California shuts down again as US coronavirus cases surge 22:23