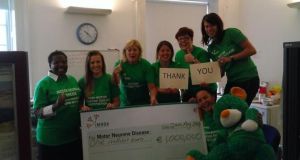 ‘Words can’t express how girls in the office are feeling right now.’ Photograph: IMNDA via Twitter

The Irish Motor Neurone Disease Association has warned the handful of people left in the country who have yet to douse themselves in freezing cold water in aid of the charity to take care and make sure they don’t do themselves and injury doing the ice bucket challenge.

The charity published a statement on Facebook this morning in which it pleaded with anyone planning to take part in the #icebucketchallenge “to please do so safely”.

In the statement, the charity said it appreciated that many people “want to go one step further than just a bucket” but added that it “won’t take much for someone to get hurt when using machinery/farming equipment etc or even throwing large quantity of water from a big height”.

It said a “simple bucket and some ice will do just fine folks, we really don’t want ANY injuries from such a fun and successful campaign”.

It released the statement after an Irish montessori teacher doing the challenge was videoed running into a pole and knocking herself unconscious after being doused.

Teresina Bell from Drogheda was caught on film running into a metal clothes line after her mother threw a bucket of ice-water over her head. Ms Bell had been challenged by her nephew to take part in the viral fundraising challenge.

Irish people have also employed heavy farm machinery to do pour the water over themselves and another person filled a car with water in order to do a still more extreme version of it.

In Spain a Belgian man was seriously hurt at the weekend after a pilot friend dropped 1,500 litres of water on him from a fire-fighting plane as part of a failed Ice Bucket Challenge. The 51-year-old man was rushed to hospital in northern Catalonia where he is currently being treated.

Four firefighters in Kentucky were injured last Thursday while attempting to spray college students with water for the challenge. The aerial ladder on which they were standing came too close to a main power line at Campbellsville University. While the ladder did not hit the line, electricity from it struck two of the firefighters who were in the bucket.

The craze - which has seen Facebook absolutely flooded with videos of people in various states of wetness in recent days - has seen more than €1 million raised in Ireland for the IMNDA, it was confirmed this morning.

“Words can’t express how the girls in the office are feeling right now so a photo will just have to do,” the IMNDA posted on Twitter this afternoon under a picture of its staff holding a large green bear and an even larger novelty cheque for the magic million.

Big rise in CO2 emissions cut ‘needed to stem climate emergency’ 22:33
Facebook to lift ban on political advertising in US 22:33
International duty off the menu at Liverpool due to quarantine rules, says Klopp 22:30
Vettel confident new Aston Martin team will give him licence to thrill 22:30
Gunman ‘smirked’ and walked away after firing shots, David Douglas murder trial told 21:43