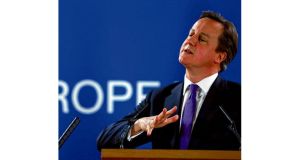 David Cameron: "A secret ballot in a parliament is an extraordinary concept. MPs and MEPs should vote transparently so that their constituents can hold them to account." photograph: Dan Kitwood/Getty Images

Members of the European Parliament must not be able to vote in secret when they decide whether to accept or reject last week’s agreement between the European Union’s 27 leaders, British prime minister David Cameron has said.

A secret vote of MEPs can be held if more than 151 of them demand it, according to the president of the European Parliament, Martin Schultz, who is one of those who was unhappy at the decision of EU leaders to cut the next seven-year budget.

However, Mr Cameron, who was roundly applauded by his MPs yesterday for leading the charge for budgetary cuts, declared: “A secret ballot in a parliament is an extraordinary concept. MPs and MEPs should vote transparently so that their constituents can hold them to account.”

“They have to account not only to their electorates but to their countries, which will suffer if a deal is not passed through,” said the Conservative leader, who even escaped blame for the fact that the UK’s contribution will rise because part of its rebate was given up during the Labour years.

“All the UK MEPs account for a decent percentage of the European Parliament, so it makes a real difference if socialist MEPs and Liberal MEPs from Britain vote for this budget, and they should do so in an open, transparent manner.

“The idea of having a secret ballot in a parliament seems to me completely wrong. The fact is that you send MEPs to Brussels – and, regrettably, to Strasbourg – so you can see what they do on your behalf,” he declared.

Urging MEPs not to reject the budget, as they can do, Mr Cameron said emergency rules would have to come into play to set the EU’s budget annually, if the European Parliament did not accept the European Council’s decision.

“It would be impossible for countries to plan their cohesion spending, their structural fund spending, what roads to build and what networks to put in place.

“That would be a very unsatisfactory outcome. I hope that the parliament will look seriously at that, recognise that having no deal would be very bad for all countries that want to see proper planning and proper budgeting, and recognise that this is a good deal and it should accept it,” he went on.

In confident mood, Mr Cameron taunted the Labour leader, Ed Miliband, demanding to know if he would instruct Labour MEPs to vote for the budget deal, and not with its umbrella party, the Party of European Socialists, which opposes budget cuts.

Earlier, Mr Miliband had welcomed the outcome of the negotiations, though he said Labour MPs and Eurosceptic Conservatives had given him “a strong negotiating mandate” when they combined in last month’s vote to demand a cut.

“Even he must see the irony of his having sought to vote down a proposal that turned out to be the outcome of the negotiations. He was against it before he was for it: that is the reality,” said Mr Miliband.

However, the prime minister had the better of the exchanges: “It is one thing saying something in this parliament. The real test of leadership is whether [he] can get not only his own socialist MEPs, but all socialist MEPs to support the deal.”

Following the pledge of a referendum on EU membership, Conservatives are ecstatic about last week’s result, with many believing that it is evidence that a UK leader properly pushed from behind by his backbenchers can demand radical reform.

“[It] demonstrates how many of the United Kingdom’s objectives can be achieved by serious and professional negotiation with our allies.

“Does he accept also that our objectives – for example, the working time directive – can be achieved, as he did with the EU budget and as the United Kingdom did with the CFP, by working with the close allies we have on so many of these subjects?” Sir Malcolm asked.