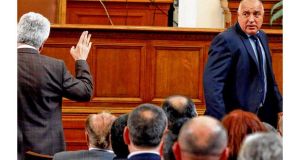 Prime Minister Boiko Borisov, a burly former fireman and bodyguard who came to power in 2009, announced his government’s departure after failing to quell widespread anger at the centre-right cabinet’s perceived mismanagement of the economic crisis.

Tens of thousands of people around Bulgaria joined anti-government rallies in recent days, and were not mollified on Monday by Mr Borisov’s sacking of his unpopular finance minister or his pledge the following day to cut electricity prices and revoke the licence of a Czech power company.

Clashes between protesters and riot police over the two days left 26 injured and were cited by Mr Borisov as the main reason for his government’s resignation.

“It is the people who gave us power and today were are giving it back to them,” he told parliament. “I will not participate in a government under which the police beat up people or where threats to protest replace political dialogue. If the street wants to govern the country, let it do so . . . There is nothing more we could do, we gave the maximum . . . I do not want to see blood on the streets again.”

The cutbacks imposed by Mr Borisov’s government have been far less severe than in some other EU states, but a freeze on wages and pensions and an increase in taxes have taken a heavy toll on many people in a country where the average wage is about €400 a month and the standard pension about one-third of that.

The government’s popularity has been further eroded by corruption scandals, allegations of close ties between politicians and criminals, and the widely held suspicion that a clique of politicians and businessmen are enjoying extravagant wealth while most people struggle to make ends meet.

If, as expected, parliament votes today to accept the government’s resignation, President Rosen Plevneliev will probably name an interim cabinet of experts ahead of snap elections. A general election that was planned for July is now likely to be held in April or May, analysts said.

They were divided on the wisdom of Mr Borisov’s move. Some believed that his resignation would help calm the situation and improve his Gerb party’s chances in the snap vote, and others predicted that street protests would continue. More rallies were planned for last night.

“The resignation is the only responsible move . . . It also gives Borisov some legitimacy to stay in political life in the future, despite the violent police actions last night,” said Kantcho Stoychev, an analyst at Gallup International.

Political analyst Evgeny Daynov said it was “unlikely that the protests will stop. People are perplexed and Borisov made an even bigger mess by leaving.”

Recent polls show Gerb maintaining about the same support as the main opposition Socialist party – the popularity of the brusque, tough-talking Mr Borisov has fallen to the level of Socialist leader and former premier Sergey Stanishev.

Ireland has one of the lowest breastfeeding rates in the world – report 04:01
Brexit to curb services trade with UK, accountants group warns 04:00
Brexit and Covid force consumer sentiment to lowest level 04:00
Tourists and renters to be permitted in student accommodation 03:51
Mortgage drawdowns fall by almost a third 03:00