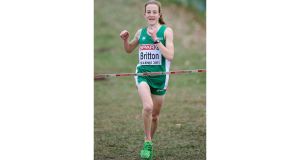 The Kilcoole AC member, who won the under-23 title in 2006, said afterwards victory in Velenje had become an obsession this year, after she finished fourth in 2010 having run the same time as bronze medallist, Anna Dulce Felix of Portugal.

“I can hardly believe it,” she told RTE. “That was the plan (to make the running) from the start and I knew I had to it. After last year, this is the only medal I wanted. In a way, it's been on my mind for the whole year.”

The Irishwoman had Nadia Ejjafini for company for the first half of the race but the Italian was unable to cope with the pace and was eventually reeled in by Steel.

The British athlete did her utmost to close the gap on Britton but the Irishwoman led by around 30 metres and never looked like surrendering that advantage.

As Britton relentlessly pressed on, Steel suffered from her efforts and allowed Felix into the silver medal position.

There was also reason to celebrate for Dundrum South Dublin AC athlete Joe Sweeney, who was fifth in the men’s race.

Sweeney was unable to maintain the early pace he set in pursuit of eventual winner Atelaw Bekele of Belgium, but hung on to claim a very creditable fifth.