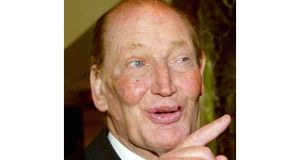 Kerry Packer, media and gambling mogul and Australia's richest man, has died at the age of 68. Packer revolutionised the world of professional cricket by establishing his own World Series Cricket in 1977. Photograph: Rob Griffith/AP

Kerry Packer: The Australian business tycoon Kerry Packer, who has died aged 68 following a long period of ill health, loved gambling, whether in the boardroom or the casino.

Through this passion, he transformed a magazine and television business worth millions into a diversified enterprise worth billions, became his country's richest person and, in the late 1970s, gained a reputation as the man who transformed cricket, making the one-day international an established feature of the sport.

In the words of former Australian captain and commentator Richie Benaud; "It's because of what happened then, cricket is so strong now."

One of Packer's executives once said that despite his copious wealth, "KP" was, in fact, "just like the average Aussie bloke". Kerry did not read books, he said, but watched plenty of television, swore like a trooper and loved gambling, sport and having fun with the boys. He could be incredibly abrasive and, then, extraordinarily compassionate.

In some ways, the magnate's "ocker" tastes were the secret of his success; his populist magazine empire and television network frequently outperformed their rivals. But his burning desire was to make even more money; his fortune grew some five times after he supposedly gave up business in 1987, and a ferocious sense of privacy set him well apart from most of his readers and viewers.

With wealth came power, and Packer's connections with politicians, especially former Labour prime minister Bob Hawke, ensured the Canberra government's media policy often went his way. While in office, Hawke signed off a testimonial video for his mate with the words "Good on yer, Kerry, you've been true blue [ loyal]".

Packer believed people could be bought. In 1976, before pulling off perhaps his greatest coup in establishing World Series Cricket, he was stuck in talks with the Australian Cricket Board about TV rights to Test matches.

"Come gentlemen," he said, "there is a little bit of the whore in all of us; name your price." He also liked to win, especially at gaming; tales of his successes, losses and extraordinary tips at casinos around the world are legendary. He reportedly lost £8 million playing blackjack in London in 1987, then won £10 million at the same game in Las Vegas, eight years later. Tales of tips to hostesses and waitresses of £50,000 also abounded.

Yet Packer's one weakness was his health. His biographer, Paul Barry, said males in the Packer dynasty loved a bet, hated paying tax, were excessively secretive and tended to die young with heart trouble. On all counts, Kerry was no exception.

In 2004, Business Review Weekly magazine estimated his fortune at AUS$6.5 billion (€4 billion) and financial markets were always keenly interested in his state of health. In June 1998, rumours of his death swept world markets and the share price of his listed media company, Publishing and Broadcasting, fell. The Big Man, as he was known, was, in fact, alive and well and living in London's Savoy hotel.

Packer, an unrepentant smoker, was said to have been annoyed by the rumours. But in October 1990, he had suffered a near-fatal heart attack during the Australian Open polo championships in Sydney. He was clinically dead for six minutes before being revived by ambulance officers. Typically, he went on to buy portable defibrillators - which became known as Packerwhackers - for every ambulance in New South Wales. The episode also gave rise to the most quoted of his rare public remarks, when he told an interviewer: "Son, I've been to the other side, and let me tell you, there's nothing there."

His father, Sir Frank Packer, was a former boxer and goldminer who built up a publishing empire in Sydney in the 1930s.

Born into financial and social privilege, Kerry and his brother, Clyde, were raised by a nanny, and sent to a boarding school just down the road from the family mansion. From the age of five until nine, Kerry saw his mother Gretel perhaps half a dozen times, though some of this dislocation was due to a bout of polio that meant nine months in an iron lung and two years in Canberra.

Once back at school, he was a lonely child who suffered from dyslexia. Both brothers then joined the family business, Consolidated Press: Clyde, their father's favourite, went on to become managing director of Channel Nine; Kerry, meanwhile, was referred to as a "boofhead" by his father. Then, in 1972, Clyde split from the family, going to live in California. Sir Frank died two years later of heart failure. Clyde passed away in the United States in 2001.

Thus, at the age of 37, Kerry took over the business empire and money and its generation became the mark of his self-esteem and ambition. Apart from media interests, there were profits from property, leisure industries such as skiing, and cattle properties estimated to cover an area larger than Belgium.

However, Packer's finest hour came in 1977, with the establishment of his World Series Cricket, after he was denied television rights to the game by the Australian Cricket Board. Because of the players' coloured flannels, it was dismissively known as pyjama cricket, but it established Packer as a world influence in sport.

In 1984 came perhaps his darkest moment, after arch-rival Fairfax Press published leaks from a royal commission report about a crooked, wealthy businessman codenamed Goanna (a generic name for Australian lizards), involved in drug-trafficking and criminal activities. Packer identified himself as the Goanna, but denied the allegations. He was cleared but was deeply hurt by the experience.

His luck turned in 1987, when Alan Bond, the now-disgraced Australian businessman, offered him $1 billion for the Nine Network, about twice its worth. Packer accepted and, though in his late 40s, he took to polo with the enthusiasm of a man half his age, putting millions into the game in England, Australia and Argentina, and spending up to five months a year on the international polo circuit.

In 1990, he bought the Nine Network back from Bond for $200 million and proudly admitted: "You only get one Alan Bond in your lifetime."

Packer never shared Rupert Murdoch's ambitions for a global media empire, and did not succeed in the family's aspirations to take over Fairfax, publisher of the Sydney Morning Herald and Melbourne Age newspapers. But, like the many successful sportsmen he admired, he had a developed sense of timing, and knew when to invest to maximise his return.

In 1995, he had a second heart attack, and, in 2000, received a kidney from his friend and helicopter pilot Nick Ross. But eventually his gamble with life gave out. Packer was a family man, especially close to his son, James, who took over the businesses in 1996. He also leaves his wife, Roslyn, whom he married in 1963, and daughter, Gretel.