Baby bison in need of name 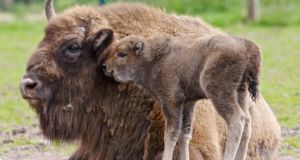 Wardens at Fota Wildlife Park in Cork are calling on the public to suggest a name for one of its newest arrivals, a baby bison.

The male European Bison calf was born last Saturday to mother Donna and father Boris who sadly died on Wednesday. Boris a 16 year old who had originally come from Boras Djurpark Zoo in Sweden had been at the park since 1999 and was the dominant male in the group at Fota.

Willy Duffy head warden at Fota Wildlife Park said it was “great to see a calf born just as the summer is about to begin but it is also sad to be losing Boris as he has been with us since we introduced the herd of Bison in 1999”.

The baby bison is the 16th offspring from Boris which included three calves that were introduced into Komaneza Forest in Poland in 2008 as part of a reintroduction programme into the wild.

The European Bison, also called the Wisent, is Europe’s largest native mammal. Large bulls can reach over six feet in height and weigh 2,000lbs but the species is also extremely agile and capable of jumping a three-metre wide stream from a standing position. They live in mixed deciduous and coniferous forests in Eastern Europe, eating mostly leaves, bark, acorns, lichens and mosses.

The park has been part of a European-wide breeding programme ever since Bison first arrived in Cork in 1999. A significant number of calves have been born in the years since and many have been sent overseas to aid in programmes being developed elsewhere.

The new bull calf will join “Shay Gibbon”, born last year in the park, in being named by the public. Names can be suggested at fotawildlife.ie and the winning suggestion will also be rewarded with an annual membership to the park.