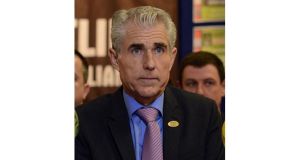 At a meeting today, the standing committee of the ASTI said teachers had reacted angrily to proposals for further pay cuts and a worsening of working conditions.

“The proposals come at a time when second-level schools are reeling from the impact of the education cutbacks including significant reductions in staffing and resources,” it said.

The ASTI said its standing committee had expressed the view that “as public sector workers had already taken a 14 per cent reduction in pay and had delivered additional work and substantial savings under the Croke Park Agreement, the fairer way for the Government to achieve additional savings is through a more progressive tax system."

The union said its standing committee had noted that the Croke Park Agreement gave a commitment to no further pay cuts.

The ASTI said its standing committee had agreed to put proposals for a re-negotiated Croke Park agreement, which were produced by the Labour Relations Commission last week, to a ballot of members. However, the union is to recomend that they should be rejected.

Earlier, the union representing medical scientists working in the public health service said it would recommend that its members accept the proposals for a new agreement.

The general secretary of the MLSA Terry Casey, said: “Having considered the Labour Relations Commission proposals in detail and after a careful assessment of the possible alternatives, the executive committee of the MLSA has decided to recommend their acceptance to its members.

"This decision has been made all the more difficult in view of the significant savings and efficiencies, of the order of €16 million, already achieved since 2011 in the public hospital laboratory services under the terms of the original Croke Park Agreement.”

Meanwhile, unions opposed to the agreement are to launch a national campaign to urge members to reject the deal.

The Irish Nurses and Midwives Organisation (INMO), the Irish Medical Organisation (IMO), the Civil and Public Service Union (CPSU), and Unite are to hold a series of information meetings around the country to highlight their opposition to the new proposals.

Derek Mullen of the CPSU said the measures were anti-family and particularly anti-women.

The unions said the trade union movement would be in uncharted waters if the larger unions passed the proposals but it was rejected by a significant number of other groups.

Germany offers €220m in supports to print media but some are sceptical 18:13
Coronavirus: 67 additional cases but no new deaths reported in the State 18:10
‘Overwhelming’ support for closing streets around Grafton Street to traffic 18:05
Companies without tax clearance shut out of Covid wage subsidy 18:03
Hundreds of children returned to Libya from Mediterranean in 2020 17:45