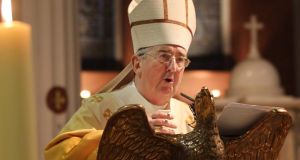 The Archbishop of Dublin Diarmuid Martin has said he told Pope John Paul II that he was wrong about the rapid secularisation of Irish society.

Archbishop Martin said late in his life Pope John Paul II had asked him why secularisation had moved so fast in Ireland.

"For one of the rare times in my life I said to him 'Holy Father, you are wrong'. In fact the roots go back back. They are basically cultural roots," Archbishop Martin told The Marian Finucane Show on RTÉ Radio One this morning.

The Archbishop said he believed the secularisation of Irish society pre-dated the release of Humanae Vitae in 1968, the doctrine disapproving of contraception which caused many liberal-minded Catholics to drift away from the Church's teaching.

He maintained that the secularisation of Irish society was a result of the fact that Ireland was an open economy.

“Humanae Vitae was a moment when you could mark as a significant event, but things had changed well before that I believe,” he said.

He also acknowledged that the role of women in Irish society had changed radically. “The Church has never really grappled with that in the way that it should and it must,” he said.

He also said that the previous Pope Benedict XVI had taken a keen interest in the future of Irish culture and its relationship with the Church.

“Irish literature always had a healthy anti-clerical streak in it, but the church has found it difficult to find a place in that area.”

He revealed that he could not say mass two days ago in the Pro-Cathedral on Holy Thursday without mentioning the case of Father Patrick McCabe who was sentenced last week for abusing children in the crypt of the cathederal. “I just could not simply ignore that. It would have been dishonest of me,” he said.

Klopp confirms Henderson will miss rest of the season 22:35
Reopening of pubs that do not serve food may be delayed beyond July 20th 22:06
Record numbers of patients waiting for treatment, new figures show 21:51
Inquest to be held into death of Nóra Quoirin next month 21:30
Developer behind national children’s hospital says work will recommence next week 21:20