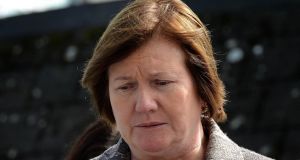 Ann Maria Burke, who gave evidence at the inquest into the death of Savita Halappanavar in Galway yesterday. Photograph: Eric Luke

A midwife manager at Galway University Hospital has identified herself as the person who told Savita Halappanavar that she couldn't get a termination "becuase Ireland is a Catholic country".

Ann Maria Burke said that she now regrets the remark but explained that it wasn’t meant to be hurtful.

“It was not said in the context to offend her. I’m sorry how it came across. It does sound very bad now but at the time I didn’t mean it that way. It was the law of the land and there were two referendums where the Catholic church was pressing the buttons.”

She said it was more to give information and to throw light on Irish culture.

Earlier in the week, lawyers for the hospital had suggested that Ms Burke had signed only a draft statement and might not stand over it.

However, she was called to give evidence, and yesterday coroner Dr Ciaran MacLoughlin asked her directly whether she had said to Ms Halappanavar that “it couldn’t be done, this is a Catholic country”.

Upset
Ms Burke replied: “Yes, to be honest, I’m upset about this, I’m very upset about this. I did mention ‘a Catholic country’, I didn’t mention it in a hurtful context, it was in context of a conversation we had . . . She talked about India, she mentioned there was no problem taking a baby in India, and the Hindu faith was mentioned in conversation. I did explain to her because I knew it wasn’t possible to induce her because, I had been informed by the consultant, the foetal heartbeat was there. It was not in the context of offending her and sorry if it came across that way. I don’t think I came across as insensitive at the time but I have to say it does sound very like that now.”

Dr MacLoughlin said the words “went around the world”. Irish public hospitals do not follow any religious tenets or dogma, he pointed out.

“I shouldn’t have said it but it came out the wrong way.”

It was a chat and had nothing to do with the provision of care, she told the inquest.

She said she was trying to be broad and explanatory. She likened her comment to explaining to a person from Saudi Arabia about drink.

She said “another lady” was in the room at the time she made the remark. Ms Halappanavar’s friend Mrdula Vaseali has told the inquest that a midwife told them that her termination could not be carried out because “we don’t do that here. It’s a Catholic thing.”

However, Ms Burke denied addressing Ms Halappanavar as “dear” and said she would never use that word.

Dr Anne Helps, obstetric gynaecology registrar to consultant Dr Katherine Astbury in October last year, also did “not recall” whether she looked at Ms Halappanavar’s medical notes on the morning a colleague had told her about his concerns about her deteriorating condition. Dr Helps said she had had Ms Halappanavar’s chart in her hands during the ward round with Dr Astbury at 8.20am on Wednesday October 24th.

She said she had had a verbal report “in the corridor” from Dr Ikechuckwu Uzockwu, the senior house officer on duty the night before, who had been concerned at 6.30am about Ms Halappanavar’s temperature of 39.6 degrees, elevated heart rate of 160bpm and a foul-smelling vaginal discharge.

“It was a conversation in the corridor without the records. [Dr Uzockwu] just said to me, ‘Your patient spiked a temperature and is feeling unwell.’ There was no mention of a foul-smelling discharge.”

She said he had documented his concerns in the notes.

“He had documented his findings in the notes but he didn’t tell you about it?” asked John O’Donnell, for Praveen Halappanavar.

“Not that I recall.”

“Did you go and look at the notes?” Mr O’Donnell asked.

Dr Helps agreed she had the chart during the ward round, with Dr Uzockwu’s note about the discharge. Asked by Mr O’Donnell “You didn’t tell your consultant [Dr Astbury] about it?”, she said: “That is possible.”

“You’ve no recollection of it at all and you certainly didn’t tell your consultant about it. Do you agree?” asked Mr O’Donnell.