An Irish artist's quest for meaning in Mexico's capital of femicide 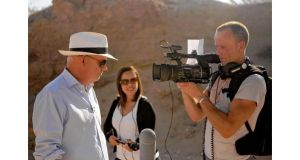 The artist Brian Maguire and the director Mark McLoughlin. The film crew were subjected to death threats in Juárez 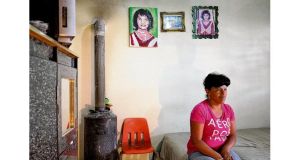 When the Irish artist Brian Maguire first ventured, in 2008, to the Mexican city of Ciudad Juárez, then the most dangerous in the world, the warnings were severe.

Separated from the US by the Rio Grande and a five-metre-high fence that stretches 1,000km, this sprawling border city has become infamous for the mass slaughter of young women and girls.

The wave of femicide that has swept through Juárez since 1993 claimed a reported 247 women’s lives in 2010 alone. Countless others have disappeared, and no one is certain why. The victims tend to be young factory workers from poor backgrounds with dark skin and long hair. Their bodies have been recovered in groups, raped, mutilated and discarded on desert dumping grounds.

Many believe the lack of investigation and conviction enables copycat killers to murder with impunity. The families left behind, meanwhile, stand little chance of navigating an overloaded bureaucratic system. That sense of helplessness sparked something in Maguire, drawing him to Mexico in the belief that if he absorbed the emotions involved he could harness the issue through his art.

For the past three decades Maguire’s paintings have focused on marginalised figures, such as the homeless, prisoners and mental-health patients. He attempts to counteract the erasure they seem destined for through a gesture of recognition: a portrait that acknowledges their dignity.

Taking that approach to Juárez is the subject of a new documentary, Blood Rising, which closes the Jameson Dublin International Film Festival tomorrow. It follows Maguire towards the end of a four-year search for meaning behind the carnage, visiting key locations and speaking to those affected.

“Whenever this is no justice,” Maguire says in a low growl, “people want their story recorded. It’s bad enough that it happened, but the biggest fear is that people will be forgotten and the injustice buried with them.”

It’s a sunny morning in the hills above south Dublin, and Maguire is sitting in his studio, the floorboards splattered with every colour of paint, a stove fire blazing beside him. When the 61-year-old hops up to grab two portraits of murdered Mexican teenagers, he holds them aloft to illustrate the spread of destruction.

One is a femicide victim whose mother was later assassinated after campaigning tirelessly for justice. The other is the son of a missing woman who was shot down before he could begin a scholarship abroad.

Maguire paints two versions of every portrait: one for the family to hang on their wall as a celebration of their child’s life, the other to deliver a political message to the public.

In the past, Maguire has kept the stories behind his works private. He finds out whatever he can about his subject, developing a sense of the person before committing their memory to canvas, but the background is not for public consumption.

In Juárez, however, the victims’ families believe their protests are being ignored. That frustration formed the ideological basis of the film, in which the human-rights lawyer Lucha Castro tells Maguire: “The government doesn’t listen to me or the mothers. We could be saying this every day of the week and it means nothing. If you can get this story outside Mexico, then they’ll listen.”

To facilitate the participation of victims’ families, Maguire held art workshops for children orphaned by the killings. The joy in doing so offered a reprieve from the despair that followed him through the project like a shadow. Nowhere is this better illustrated in Blood Rising than when Maguire offers condolence to one of the victim’s mothers, reaching for her hand in sympathy. The camera lingers uncomfortably, and in that moment the pain becomes tangible. Suddenly Juárez no longer seems so far away.

“There were intense levels of fear and emotion involved,” says Mark McLoughlin, the film’s director, explaining that, towards the end of the shoot, one of the cartels in Juárez issued blanket death threats to anyone caught filming. “You just can’t film anywhere exposed for more than five or 10 minutes. That’s how long it takes for people to make calls and get to you.”

Despite the dangers, McLoughlin and Maguire took their time in building reciprocal relationships based on respect. But the pacing was also a matter of maintaining their own emotional wellbeing. Even with the film completed, little details have stuck with them, and both have felt overwhelmed without warning.

“We spent months editing and becoming so deeply engrossed in this that it kind of kicks you, eventually,” says McLoughlin. “I don’t think the individual stories will ever leave me. The level of violence and suffering people go through there is totally beyond the radar.”

Elia Escobeda García has spent 11 years fighting for justice in the name of her daughter, Erika, who had two children of her own. Erika’s body was found in the street with a bra around her neck. There were strangulation marks and evidence of rape, but police concluded that her death resulted from a drug overdose. No investigation followed.

Speaking out poses its own danger, as campaigners are regularly targeted through acts of intimidation. But although Escobeda García lives in fear, she is determined to share the stories behind the pink crosses of remembrance dotted throughout Juárez. She will speak at screenings of Blood Rising by the human-rights organisation Front Line Defenders at Trinity College Dublin on Monday and at the Irish Centre for Human Rights in Galway on Tuesday. A series of similar events is being planned internationally, aided by Gavin Friday, who composed the film’s soundtrack.

Last year, homicides in Juárez fell significantly – a relative stability attributed to the Sinaloa cartel’s seizing control of the city’s drug-trafficking routes. Even still, Blood Rising will leave viewers with serious questions about life in Juárez, the most urgent being, What can be done? The answer may be as difficult as making sense of the bloodshed. “But if any work makes people ask that question,” Maguire says, “then that’s the best you can achieve. You can build from there.”