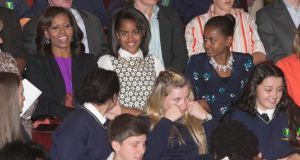 First Lady Michelle Obama and her daughters Malia (14) and Sasha (12) at the start of Riverdance at the Gaiety Theatre, Dublin. Photograph: Gareth Chaney/Collins

It isn’t often that a first lady orchestrates the ovation.

But last evening in Dublin, Michelle Obama found herself on the other side of the applause, jumping to her feet and leading the cheers as Riverdance won three new fans from the White House.

America’s first lady and her daughters Sasha (12) and Malia (14) were entranced by the special performance . “We have never seen Riverdance live – this is the first time,” she told her adoring audience before the show.

Judging by her reaction – Michelle was first to rise as the curtain fell – she wasn’t disappointed.

Their visit to the Gaiety Theatre proved a major hit for the Obama women on the opening day of their two-day trip to the Republic. With Barack Obama otherwise engaged at the G8 talks in the North, his family took the chance to fly south and take in some of the sights. Yesterday they visited the Long Room in Trinity College, where the two girls found out a little more about their parents’ ancestry and were presented with certificates of Irish heritage.

Stop-off
Then, following a stop-off at the US embassy in Ballsbridge, they went to the venerable old theatre on South King Street for an early-evening blast of the Riverdance experience before going to Matt theThresher for dinner and then returning to the Shelbourne Hotel.

It may have been an unofficial visit, but it was accompanied by the usual heavy security that surrounds them wherever they go.

In this regard, their Irish hosts played a supporting role. Even the sniffer dog was imported from a US base in Germany for the occasion.

The First Women arrived early at Dublin airport. The minutiae of their every move was not chronicled in the way the president’s day was being described for the travelling White House press pool.

Here’s what was filed for them at 8.35am when Air Force One touched down in Belfast: “It’s foggy and wet and smells um, agricultural. A lovely morn.”

In Trinity College, the visitors pored over old manuscripts and maps and parish registers in the Long Room. Both Michelle and Barack can trace their bloodlines back to Ireland.

Later, speaking from the Gaiety stage before the show, Michelle remarked of her daughters: “It was a very powerful thing to find out that these girls, who were born on the south side of Chicago, can trace their roots back here to Ireland – way back to the 1600s. That was very powerful for me as their mother and hopefully it is something that they cherish for the rest of their lives.”

From the vantage of our normal existence, we looked at the two young girls with their mom walking around the ancient library and marvelled at how relaxed and poised they seemed.

Handlers
The media was only allowed in to watch them for a short while. Then the very stressed handlers ushered everyone away. ”Thank you for coming” said one of them, emphasising the fact that, until the Obamas had departed, we were effectively in America.

A crowd – mostly American tourists – gathered to see them leave. Four mounted gardaí waited in the quadrangle – rather surplus to requirements, as the motorcade was 20 vehicles strong.

Meanwhile, Henry Healy (Obama’s cousin from Offaly many times removed) put in an appearance along with Ollie Hayes, the publican who served the president a pint in Moneygall.

”It’s good to be home” said Michelle, when she joined Sabina Higgins, Fionnuala Kenny and Riverdance’s Moya Doherty onstage in the theatre. “You have made my family feel right at home and that’s pretty awesome.”

“We love you too!” shouted a lad from the audience.

Fionnuala Kenny was lavish in her praise for Michelle Obama and she, in turn, had nothing but praise for Enda’s wife. “Mrs Kennedy” as she called her, before quickly correcting herself.

The Obamas will visit Glendalough in Co Wicklow today. And just in case anybody doesn’t realise how important these international superstars are, a meeting with Bono later on will leave nobody in doubt.