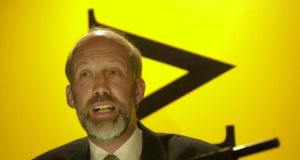 
The Alliance leader David Ford has temporarily stood down as an elder at his local Presbyterian church in Co Antrim ahead of a contentious vote on same-sex marriage in the Assembly.

Mr Ford has stepped aside from his voluntary post at Second Donegore Presbyterian church near Templepatrick amid controversy over his and his party’s support for gay marriage.

He stood aside because of opposition from some people at the church to his position. Mr Ford’s family has attended Second Donegore Church for generations.

The Presbyterian Church has a position of opposing gay marriage. Neither Mr Ford nor the church’s minister, the Rev James Tosh, would comment publicly about the issue.

However, the Presbyterian Church’s press office released the statement which Rev Tosh read to his congregation on Sunday about Mr Ford stepping aside as an elder.

“The kirk session wishes to inform the congregation that David Ford has, with sadness, decided to step aside for a time from the active duties of the eldership to reduce any offence his position has apparently caused to some within the congregation,” said Rev Tosh.

The clerk of the Templepatrick Presbytery, Rev John Murdock, said that unease had been expressed by some members of Second Donegore Presbyterian church.