No proposal for reconciliation forum 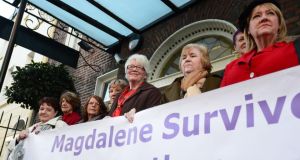 Details of the fund that will be available to an estimated 700 women, many of them elderly, will be disclosed this afternoon.

The Government has made a provision of at least €25 million to compensate former residents of Magdalene Laundries. It is also understood there is no proposal for a reconciliation forum involving the four religious congregations who ran the 10 laundries concerned and the women who had been resident in them, as was mooted recently

Details of the fund that will be available to an estimated 700 women, many of them elderly, will be disclosed by Minister for Justice Alan Shatter this afternoon after he has briefed groups representing the women.

Sources with knowledge of the process have said that payments will range from €10,000 to about €100,000, related to length of stay of women in the laundries. It is also believed that ongoing health and other such supports for the women will be provided by the State. A report by former High Court judge Mr Justice John Quirke examining the various forms of redress and support to be made available to the women will also be published today. No details have emerged as to the nature of the payments, whether they will be once-off lump sums or paid in stages, which was the initial preferred option of Government.

Mr Justice Quirke conducted a three month review and submitted his report to Mr Shatter at the end of May. His remit was to look into the feasibility of payments and other supports, including medical cards, psychological and counselling services.

‘Try and keep me out’: Biden officially invited to visit Ireland 23:07
Defence Forces commission seeks submissions as part of review 22:31
Klopp says he will not have tantrum over inability to sign a centre back 22:30
Lampard urges Chelsea players to fight their way out of a slump 22:30
Green Party seeks internal consensus on EU-Canada trade deal 22:10