You’ll get wet. You’ll get burnt. But you’ll also get Ratty, Darcy and Sherlock

Outdoor theatre – less formal and more challenging than the indoor kind – is being staged in some spectacular locations in Ireland, in wind rain and shine 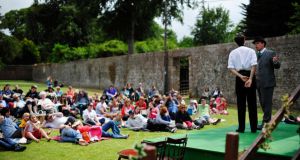 At an outdoor performance of Sherlock Holmes and The Hound of The Baskervilles in Powercourt Gardens, Co Wicklow. Photograph: Aidan Crawley 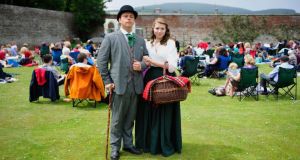 Theatre under the stars they call it but usually the outdoor productions of Chapterhouse Theatre Company take place in sunshine or misty rain on long summer evenings atop manicured lawns, mowed meadows or woodland clearings.

The travelling theatre visits country-house estates and castle demesnes throughout Ireland and the UK for three months every year presenting their Shakespeare plays, adaptations of Jane Austen’s novels and, well, whatever else takes their fancy.

We caught up with them in Powerscourt Gardens, Enniskerry, Co Wicklow and Birr Castle, Co Offaly, last week with new adaptations of Sir Arthur Conan Doyle’s Sherlock Holmes and the Hound of the Baskervilles and Kenneth Grahame’s The Wind in the Willows.

About 200 people turned up to watch the six actors perform the Sherlock Holmes play in the walled garden on the Powerscourt estate.

The sun shone obligingly as the audience spread out across the lawns on rugs and deck chairs. Company manager and actor Jackson Pentland admits they were a little nervous, as rumour had it that members of the Sherlock Holmes Society were in the audience.

Chapterhouse Theatre’s script writer, Laura Turner, says the company chose to include the mystery play in this year’s tour because “the recent resurgence of film and television adaptations shows that we are increasingly interested in characters with a dark side.

“Throughout the story, we are trying to solve the mystery, we are also trying to work out Sherlock and what his motives are,” she adds.

The audience was a lot smaller for the production of The Wind in the Willows at Birr Castle, because rain had sheeted down all day.

However, a brave audience of all ages came with raincoats, blankets (not for sitting on this time), folding chairs and umbrellas while the even braver cast created the evocative woodland mood of this classic children’s novel with the castle as a striking backdrop.

The clever cast – most of whom play another lesser character as well as their own – integrate animal gestures and facial expressions into their characters’ human behaviour in this tale of friendship and overcoming fears.

“This production is the hardest because it’s very physical. There’s quite a lot of crawling on grass under the set. Every character has to be energetic and you really work your face,” says Pentland.

“The Austens are a lot less hectic, as we walk around in period-style dresses rather than crawling under the stage in a miner’s hat.

“The audience come with their tables, fancy chairs, picnics and wine and sit drinking and chatting during the shows.”

The Lincolnshire-based company, which has been on tour for 14 years, started with an outdoor production of Romeo and Juliet in 30 venues across Britain. This year, the three touring theatre troupes will visit 100 venues.

Each show runs for two hours with a short interval during which the actors sell raffle tickets and mingle with the audience while still in character. The whole atmosphere is much less formal than that in an indoor theatre.

Projecting your voice without microphones is one of the demands of outdoor theatre. “We spend about an hour before the show warming up with vocal exercises and we use buildings or trees to bounce our voices off,” explains Pentland.

The weather is another unpredictable dimension. “If the audience is willing to stay, we’ll stay. It’s hard work. You’ll get wet and you’ll probably get sunburn as well but it’s great how you see the instant reaction of your audience in outdoor performances,” says Pentland.

It’s also all hands on deck as the six actors also take on the role of production crew. Each actor has assigned tasks when setting up and taking down the sturdy sets before moving on to the next venue.

“Often we have to leave our overnight accommodation at 9am and we’re not in until midnight,” says Pentland.

At the end of the summer, many of the actors return to work in pantomimes, as historic characters in museums and in English-language productions on the European Continent, with memories of spectacular castles and stately homes etched in their memories for another year.