Why do we run? Ask a pig on a treadmill 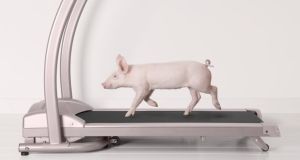 In the week that a researcher revealed he’d spent his recent career counting angry faces on Lego figures, it was going to be tough to find a scientist with a more brilliant working week. So step forward the evolutionary biologist Daniel Lieberman.

“Some years ago, I was doing an experiment where I put pigs on treadmills . . .”

Hold it right there, professor. Let us savour that vision before racing on. Literally racing on. Because Lieberman is an expert in the evolution of running in the human race.

That quote comes from a 2011 New York Times interview, a piece that also featured this glorious line: “One day, a colleague, Dennis Bramble, walked into the lab, watched what was going on, and declared, ‘You know, that pig can’t hold its head still!’ ”

It was this week’s New Scientist that finally alerted me to Lieberman’s pig-bothering brilliance. (It was just in a slightly less quotable form.) And what brought me to read it was the question highlighted by the headline: “Humans are endurance champs – why do we hate exercise?”

Here is a great conundrum among modern humans in the developed world. On the one hand there is hardly an Irish road, boreen, path, street, promenade, park or strand on which a recreational athlete is not running, striding, pounding, jogging, shuffling or struggling. It increasingly appears as if the hard shoulders of the country’s secondary roads were placed there as a pre-emptive measure against the outflow of runners that have sloshed on to Ireland’s arteries over the past decade.

And yet motivating yourself to exercise is a struggle. For so many people a run is the tip of the mental iceberg, the rest of it being hidden beneath the deep ocean of excuses. It looks like it might rain. That tweak in my hamstring feels a bit dodgy. I’ve already showered this week.

When out there, though, the rewards are clear, both in the long term and in the insidious immediacy of the “runner’s high”. This gap between expectation and outcome is a contradiction worth exploring. That a few pigs have to be humiliated in the process seems a decent price to pay.

“This was my ‘eureka!’ moment,” Lieberman explained to the New York Times. “I’d observed pigs on treadmills for hundreds of hours and had never thought about this . . . When these pigs ran, their heads bobbed every which way . . . Running humans are really adept at stabilising their heads.

“We realised that there were special features in the human neck that enable us to keep our heads still. That gives us an evolutionary advantage because it helps us avoid falls and injuries. And this seemed like evidence of natural selection in our ability to run, an important factor in how we became hunters rather than just foragers and got access to richer foods, which fueled the evolution of our big brains.”

Humans evolved to become endurance runners. Animals can run faster than us, but they quickly tire, unable to cool without stopping to pant, so hunter-gatherer humans can run them into exhaustion. It is called persistence hunting. This was our advantage over quicker, galloping quadrupeds. It means that inside each of us an endurance runner is struggling to get out. Really, really struggling.

Anyway, humans then went on to invent the supermarket. And cars. And leisure. And they didn’t need to run for survival any more. What makes Lieberman’s work so interesting is that it explains not only our evolution into running machines but also our subsequent drift into indolence.

As a species, it became advantageous to be good at endurance running, but at no point did humans evolve to like running. On the contrary, he points out in New Scientist, humans evolved to avoid “needless exercise”. In a world of limited resources, early man wasn’t going to waste his energy on popping out for a jog.

The result is a body built for running but a mind trying to flee that trait. The ensuing mental battle has had huge societal consequences among the overweight, heart-disease-ridden populations of the developed world.

All of which means that anyone lacing up their shoes for a run this weekend can do so with added self-satisfaction (should they need it). Out they will go, shaking off the twinges and the stiffness, many thousands engaged in their own contradiction of sorts. Slowly chasing down that personal best while running away from the relentless hunter that is middle age.