We need to talk about toilet roll

One Change: Our new-found love for this previously unnoticed bathroom item raises some environmental questions 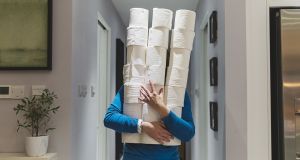 Is this the year of the toilet roll? This previously-ignored bathroom item is having its day – disappearing off supermarket shelves with stunning speed, and baffling scientists, consumer analysts and everyone else, let’s be honest. Sales in Ireland were up 86 per cent in March, according to latest data.

And while purchases are now starting to slow – and the shelves are looking a little less ravaged – it will live on as a symbol of the crisis, no doubt. According to Dimitrios Tsivrikos, a lecturer in consumer and business psychology at University College London, toilet paper has now become an “icon” of mass panic.

The United States is the world’s biggest consumer of toilet paper. In 2018, according to the Ethical Consumer, the average consumption of toilet paper in the UK was 127 rolls per capita – and we’re somewhere around the same in Ireland, I’d hazard a guess. France uses about half that amount, however, probably because of their use of bidets (which we’ll get to shortly). It’s worth noting, however, that only an estimated 30 per cent of the world’s population use toilet paper, which puts the whole “toilet roll panic” into context.

Over the years, the environmental credentials of the humble bog roll have improved, but efforts seem to have slackened off recently. Most mainstream brands are using less recycled material now than they were in 2011. Part of the problem is the growing trend for “luxury” four-ply toilet roll which uses virgin pulp, apparently for its greater softness. This, in turn, contributes to the growing problem of deforestation around the world.

Most toilet roll uses a mix of virgin wood pulp and recycled fibre. You’ll see the FSC logo on some brands, which means it contains wood products from Forest Stewardship Council-certified forests. Bleach is another issue, which is a toxic chemical that is dangerous for local water sources. Then there’s the issue of packaging – most come in soft plastic packaging which goes straight in the bin once you take it home. The best options are recycled toilet paper – such as Eco Leaf and Eco Natural and many others – they generally use less, or no, bleach in the manufacturing process and come in biodegradable packaging.

And what about bidets as an alternative? These water-powered devices are considered a green technology, because they are less draining on the environment than toilet paper. When you think about what goes into the production of toilet paper – forest depletion, bleaching, water, packaging and transport – the amount of water used in a bidet is trivial in comparison. There is also the argument that the hands-free bidet is a more hygienic option, especially when you consider that allegedly only half of people wash their hands after going to the toilet (though you’d wonder if that has changed with our new 20-second hand-washing regime).

It’s worth noting, too, that toilet paper is a public nuisance, clogging pipes and contributing to the fatberg phenomenon – the grotesque build-ups discovered in city sewers around the world.

It’s hard to see us switching to bidets in Ireland in the next while – or ever – particularly given how strongly we seem to feel about toilet paper. Though maybe we could, at some point, think about using more of the recycled stuff.

Róisín Ingle: My body has seized up while in lockdown
4