Video: All the news that’s fit to sing

irishtimes.com features the first of a series of online ‘musical columns’. Temper-Mental MissElayneous, Doctor Millar and other songwriters will sing about Ireland and its crises, to rekindle the social fire at the heart of music

The Irish Times features the first of a series of online ‘musical columns’. Temper-Mental MissElayneous, Doctor Millar and other songwriters will sing about Ireland and its crises, to rekindle the social fire at the heart of music. 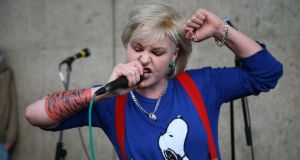 Once upon a time music was the news. Accounts of battles, rebellions and atrocities travelled from place to place in songs. There were patriotic anthems, songs of rebellion and emigrant laments. “Songs were a mnemonic device,” says the American songwriter Jeffrey Lewis, “a way of committing something to memory and passing it to someone else.”

The notion of songs as a repository of meaning, information and identity continued into the 20th century even as music ceased to be a collective endeavour and became a consumer product. Politically charged folkies such as Pete Seeger and Woody Guthrie believed that funnelling the turmoil of their times into a verse-chorus structure could aid political change. In the 1960s Dylan and his folky companions wrote songs excoriating politicians, lauding utopian ideals or wringing dramatic narratives out of news reports. Songwriters wrote about their world. Phil Ochs even released an album called All the News That’s Fit to Sing.

In his book 33 Revolutions Per Minute: A History of Protest Songs, the journalist Dorian Lynskey analyses a half century of socially engaged music. It takes in, among other things, Strange Fruit, Abel Meeropol’s eerie depiction of lynchings in the Deep South as sung by Billie Holiday, the cynical utopianism of John Lennon, the compromised activism of Bono, the city visions of Stevie Wonder and Public Enemy and the pragmatic politics of Billy Bragg.

Like me, Lynskey came of age in the early 1990s, when music and politics felt intrinsically linked. “There was a kind of a last gasp mini revival of political songwriting at that time which isn’t remembered,” he says. “There were bands that didn’t weather so well, like Back to the Planet. There was Cornershop. There was the [feminist] Riot Grrrl movement, Rage Against the Machine. All of this was happening when I was in sixth form and going to university. I remember reading about riots in Los Angeles and thinking, Oh my God, this is like Burn Hollywood Burn, by Public Enemy. It felt to me that music and politics were inseparable.”

In recent years, however, it has seemed as if the era of newsworthy music is over. The Occupy Movement stirred up a new generation of activists, but it had no The Times They Are a-Changin’ or We Shall Overcome to accompany its rise and fall. And although some musicians have written about the consequences of austerity and economic collapse, few have reached the public consciousness.

Indeed, in the first edition of 33 Revolutions Per Minute Lynskey wondered if he had written a eulogy for the protest song. He says there has been a crucial change in the ways people consume and understand music. Whereas once young people could learn about the world through their favourite bands, whether it was ghetto life from Ice Cube, Latin American politics from The Clash or vegetarianism from Morrissey, that educational function has been largely replaced by the internet. Music fans increasingly look to music not as a source of identity or information but as a source of pleasant background noise.

“I think that people have slipped into feeling that music is fun but that it doesn’t represent something bigger,” says Lynskey. “It’s no longer seen as a gateway into a different understanding of culture in the way that so many bands used to be for young people. I can’t imagine anyone watching Kings of Leon or Arctic Monkeys or Mumford and Sons and thinking, Oh my God, life is bigger and stranger than I imagined it to be.”

Jeffrey Lewis, who peppers his set with polemics from the anarchist band Crass and musical histories of communism, the French Revolution and the life of Barack Obama, still believes in the power of politically informed songwriting. “Songs ask the least of an audience. To read something or watch a film requires time, but a song is three minutes long. You can wash the dishes and listen. It slots into your day very easily. We’re listening to music right now while having this conversation,” he says, referring to the fact that we’re in a noisy cafe.

“If everyone here was experiencing this music as a written essay they’d have to concentrate and focus and not engage in conversation. Music can communicate a world view. People can use a song to internalise that world view. A good song can shift people’s perception . . . The sad thing is that those with the cultural power, the really talented high-level artists, don’t infuse their work with a social message. I mean, imagine if Eminem made a great song about Planned Parenthood.”

Dorian Lynskey uses his 33 Revolutions blog to document the work of socially engaged musicians who come to his attention – most recently the jailed Tunisian rapper Weld El 15 – and he is a little more optimistic about the future of the protest song than he was a few years ago. He points towards the imprisoned Russian punk band Pussy Riot. “It’s interesting they chose that form of protest,” he says. “In a way the songs are almost the least of their appeal, but they could have done something else. Instead they choose to be a band. With all these other options they thought that the song was the best form to get across their ideas.”

Rebels with a cause: a protest songbook

This Land Is Your Land: a left-wing riposte to Irving Berlin’s God Bless America, Woody Guthrie’s often-excised third verse goes: “Was a high wall there that tried stop me, a sign was painted said Private Property, but on the back side it didn’t say nothing – this land was made for you and me.”


Nixon in China: In 1987 John Adams and Alice Goodman took an old news story – the visit of the anti-communist president Richard Nixon to communist China in 1972 – and turned it into a musically dazzling opera that is still performed.


Mississippi Goddamn: Introduced as “a show tune, but the show hasn’t been written for it yet”, it was Nina Simone’s musical response to the murder of the civil-rights activist Medgar Evars and the bombing of a church that killed four young children. “You don’t have to live next to me, just give me my equality.”


The Revolution Will Not Be Televised: Gil Scott Heron funkily satirises the reductive and commercial nature of television. Then it was used in a Nike ad.


Love Me, I’m a Liberal: Phil Ochs’s life on the leftward musical and political margins eventually played havoc with his mental health, but not before he wrote Love Me I’m a Liberal, a song puncturing the wishy-washy political posturing, hypocrisy and faux concern of “liberals” who “love Puerto Ricans and Negroes as long as they don’t move next door”.


Alternative Ulster: Stiff Little Fingers’ punk-rock plea for change in their home province. “Take a look at where you’re living. You got the army on the street, and the RUC dog of repression is barking at your feet.”

Born in the USA: Bruce Springsteen’s song about the betrayed hopes of the working American. Ronald Reagan heard it as pure jingoism and claimed it as his favourite song.


A Design for Life: Manic Street Preachers have a chart hit bemoaning the shallowness of modern society that rather impressively opens with the line “Libraries give us power”.