36 hours in Los Cabos, Mexico; where to eat, what to see and where to go out. Video: The New York Times 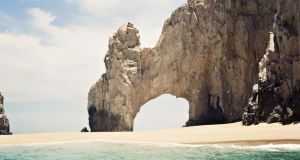 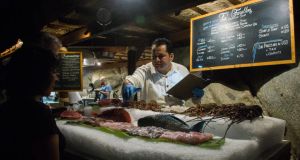 The seafood menu in El Farallo in the Resort at Pedregal in Cabo San Lucas. Rising star Yvan Mucharraz, the executive chef, worked with Thomas Keller and Juan Mari Arzak before moving to the cape. Photograph: Duy Linh Tu for The New York Times 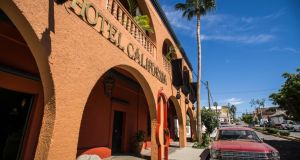 The central Hotel California in Todos Santos is rumored to be the source of the Eagles song. Photograph: Duy Linh Tu for The New York Times

Collectively called Los Cabos, or just Cabo, the desert destination was upgraded in 2012 with newly paved roads and a new international airport terminal, much of it undone last autumn by Hurricane Odile, the category-3 surprise that ravaged the region and stranded some 30,000 tourists. While evidence of the damage remains in construction crews and shorn palm trees, most of the resorts have reopened; two new golf courses, including the first from Tiger Woods, have opened; and Delta Air Lines began seasonal direct flights from JFK in December. Rent a car to explore the peninsula’s less explicit charms, including surf breaks, organic farms, the Baja desert and a pair of art-centric colonial towns.

6.30 pm
2 Dinner on the Farm
Given its desert location, farm-to-table dining is a surprise in Los Cabos but all the rage at the tip of Baja with the expansion of organic farming near San José del Cabo. Flora Farms combines style and sustenance on 10 acres featuring an open-air restaurant surrounded by vegetable beds. Book a table ahead as well as a 30-minute field tour to get the lay of the land and spy the new “culinary cottages,” privately owned two-bedrooms that are also available for rent. Start dinner with a garden-fresh watermelon-basil-mint Farm Julep (€10) and bread from the wood-fired oven. The menu changes according to the available produce but usually includes pizzas (€14), salads (around €11) and freshly caught fish (about €20).

9 pm
3 Courtyard groove
Join locals in the postprandial promenade around the town square in San José del Cabo, dodging errant soccer balls from children’s games and teetering toddlers shepherded by their parents. For a tranquil nightcap, sit under the towering palms that inhabit the courtyard restaurant at Casa Natalia hotel, nursing a spicy mango martini or a tamarind mojito (€8 each). For live music and a potential brush with fame – members U2 played an impromptu set here last spring – hit the more convivial courtyard at La Osteria.

Saturday
9 am
4 Land’s end, Ho!
If there’s a beaten path in the southern Baja, it’s the route to El Arco, the arched rock in a dramatic promontory that forms the southernmost reach of the peninsula. Beat the crowds with an early trip along the figurative path via boat across Cabo San Lucas Bay. Hustlers work Medano Beach and its neighbouring harbor, selling trips to the arch in glass-bottom boats that allow passengers to see the triggerfish and other creatures (starting around €9 per person). Above the surface, glimpse rock caves, a sea stack shaped like the cartoon character Scooby Doo, brown pelicans and sea lions. Romantics beware; launches drop passengers at calm Lovers’ Beach on the bay side for walks over to surf-pounded Divorce Beach on the Pacific side.

11 am
5. Catching big air
Wakeboarding meets jetpack-style propulsion in the new sport of flyboarding. Sign up for a giddy lesson in aquatic levitation with Cabo Flyboard (€180 for 30 minutes). “Fliers” don a helmet and life jacket and strap their feet into boot-style bindings attached to a board. The platform features twin water jets beneath it connected to an instructor’s jet ski via a 20m pressurised hose , which, at the instructor’s control, propels the rider out of the water and into the air up to 15m. Depending on fearlessness and flexibility, fliers can do acrobatic flips and dives into the water, or just hover above the surf to the delight of photo-snapping kayakers, stand-up paddlers and beachcombers across Medano Beach.

1 pm
6. Serial beachcombing
The roughly 20-mile stretch of coast from Cabo San Lucas to San José del Cabo is lined with beaches, many too rough for safe swimming or dominated by resorts that make access all but impossible. Fortunately, some of the best are most convenient. Don’t move from Medano Beach in Cabo San Lucas if your idea of a great day at the beach includes parasailing, Jet Skiing or drinking at beach bars. For more tranquillity, hit Chileno Beach, about nine miles east, which lost its shade palapas to the hurricane but remains a clean beach for swimming. Palmilla Beach is a little trickier to find (follow signs for One&Only Palmilla resort) and less crowded as a result.

2 p.m.
7. Surfer Grub
All those sea swells hitting the tip of Baja make for some nice surfing curls, the most reliable of which is on Costa Azul, just west of San José del Cabo. Look for a dingy concrete building painted to advertise Zipper’s Bar & Grill to find the popular hangout in a shaded beachfront terrace steps from the surf. Here, guacamole (€6), fish tacos (€8.50) and lobster tacos (€15) compete for attention with the surfers trying to ride the waves beyond. Rent a board (€13.50 for two hours) or sign up for an hour-long lesson (€39), then celebrate with a house Tecateita (€6), a margarita served with a bottle of Tecate beer upended into the glass.

4 pm
8. Gallery tour
The less commercial of the twin towns on the peninsula, San José del Cabo, features a colonial mission cathedral, cobblestone streets and a town square where local families gather nightly. Many of those streets are lined with art galleries that have made the village a collector’s draw. On Thursday evenings, November to June, most stay open until 9 pm for Art Walk, but in any season the cluster of dealers creates an easily accessible progressive exhibition.

8 pm
9. Seafood special
The drama of Cabo’s famous rock formations meets an emerging culinary star in El Farallon, the seafood restaurant of the Resort at Pedregal in Cabo San Lucas. Yvan Mucharraz, the executive chef, worked with Thomas Keller and Juan Mari Arzak before moving to the cape, where he oversees the resort’s four restaurants.

In El Farallon he offers a seafood market menu - guests are guided through raw selections of fish, lobster and clams - on a candlelit terrace extended over shore-side boulders bashed by waves all evening. Choose the feeds-two “Bounty of Ensenada” (€104) for a feast of fresh fish and lobster, preceded by the soup of the day and three appetizers that may include ceviche and fried calamari. Linger to watch the Milky Way come into view.

Sunday
9 am
10. Bridge to nowhere
Among the benefits of rising early in the desert, including cooler temperatures, is the chance to catch some of its wildlife in action. Drive into El Tule canyon, roughly halfway between the towns that anchor the peninsula, to Wild Canyon Adventures park, looking for road runners and song birds among the cardon and cholla cactus. The park recently added a wooden suspension bridge, which it claims is the longest of its kind in the world at 360m. Basic park admission ($10) gets you pedestrian access to the bridge that dips down about 100 feet for views into an often-dry river bed lined with palm trees and rich in bird life. For further thrills, sign up for the eight-line zip-line course (€90) or drive a jeep through the desert to the beach and back across the new bridge (€90).

11 am
11. Day Trip
One of Mexico’s “pueblos mágicos,” or “magical towns,” Todos Santos, a bohemian getaway about 48 miles up the Pacific Coast from Cabo San Lucas, offers a welcome escape from the latter’s tequila-shooting party scene. Near the central Hotel California, rumoured to be the source of the Eagles song (but not confirmed by its Canadian owners), there is a clutch of art galleries and arty shops, the best of which is Alas y Olas Gallery, selling paintings and crafts from around Mexico including fanciful handmade stuffed animals and embroidered tablecloths. Rent a mountain bike from Tres Santos Hub (€36) for a bouncy ride on dirt roads to the beach and return to taste Baja Midnight moonshine at the Distillery, after designating a driver.

Hilary Fannin: A trip to Belfast feels like a much longer journey
2