Walk for the weekend: Revel in the magic of Mahon Falls 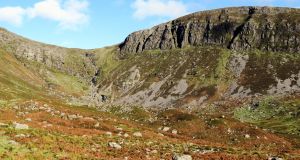 From the bottom it looks intimidating but it is a straightforward walk up a narrow track across the scree under the cliffs.

There are few experiences more satisfying in the mountains than ascending the steep ground beside a waterfall as it cascades down into silent plunge pools before continuing its tumbling thunderous course, shimmering in sunlight, gushing over rocks and through narrow ravines.

Such is the case with Mahon Falls as the waters of the River Mahon plunge over sandstone cliffs on the southern slopes of the Comeragh Mountains.

A waterfall is both vibrant and calming as the turbulent waters release negative ions which gives one a soothing sense of wellbeing.

A track has been laid from the car park into the base of the Falls where the plummeting waters have deposited a bed of boulders which facilitates the crossing of the river which is necessary as you have to leave the cataracts on your left as you climb the slope.

From the bottom it looks intimidating but it is a straightforward walk up a narrow track across the scree under the cliffs.

It was a wonderful sunny morning with the cliffs etched against a deep blue sky.

At the top of the cascade I turned around to take a photo down the Mahon Valley to see a bank of dark cloud rolling in from the sea on the rising south east wind.

Its wispy tendrils were already caressing the cliffs on either side of me and soon the landscape was enveloped in a thick mist.

The summit plateau of the Comeraghs is a featureless moorland which makes for a good testing ground for navigation skills with map and compass.

As I was clear of the cliffs I was able to head north east up to Cnocan an Phiopaire (726m) and continue on the same heading to Spot Height (792m) which is but a short walk from the great cliffs surrounding Coumshingaun Lough, the most impressive landscape feature in these mountains; but in that dense mist it would have been a pointless exercise.

From here the route forms an arc through the watershed separating the various rivers which flow in all directions from the plateau.

It was tedious walking in parts as I had to make my way around numerous peat banks and still keep on course to Spot Heights 743m, 751m and 750m.

Dropping down a short distance from the latter point brought me to the cliffs of Curraghduff from where my route ran south to the cliffs around Com Fia.

As I made my way the cloud lifted and I got a view down into the great Com Fia with its precipices encompassing three lakes while away to the north the Nire Valley was stippled by shafts of sunlight.

The clearance meant I could pocket the map and head straight for the cairn at Spot Height 668m which marks the top of the spur which slopes down to the car park.

A fence leads the way down. A great day’s walk but one, I must repeat, when the wind isn’t in the southerly quadrant.

Start/Finish: A Car Park at the start of the track to the base of the waterfall. Grid Reference: 314 078

How to get there: Take the N25 east from Dungarvan. After 12 kilometres go left at the fork at Lemybrien on to the R676 Carrick-on-Suir road. Mahon Falls is signposted from the third junction on the left.