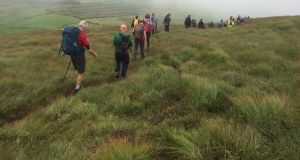 Seventy-five strong, we are congregated off the main tourist trail on the Dingle Peninsula. At a place that has long been a favourite of mine, we are discovering some fascinating details of Medieval Christianity.

Local archaeologist, Isabel Bennett, tells us that the Kilmalkedar Monastery was originally associated with St Brendan, but the later 12th century church is almost certainly modelled on Cormac’s Chapel in Cashel.

She points to a marked stone for us to identify. Not covering myself in glory, I suggest it might be Ogham script; Isabel quickly demonstrates it is, in fact, Latin.

She then identifies an Ogham stone, which she translates before going on to disabuse another of my pet theories: I had assumed that Ogham was an ancient Celtic alphabet, predating Latin’s arrival in Ireland, but apparently both forms existed simultaneously.

This is all part of the delightful learning experience that goes with following most pilgrim paths.

There are, of course, many echoes from the past in the form of ringforts, monastic sites and a ruined medieval castle for Isabel to explain, since the Dingle Peninsula is one of our most richly adorned landscapes for antiquities. Eventually, the route transforms into a delightful little boreen offering stunning views over the Three Sisters peninsula before reaching Gallarus Oratory – undoubtedly the kicker of the Cosáin.

An ancient place of worship, whose construction date has been lost to the mists of time, it is entirely built of unmortared stone with its apex roof giving the appearance of an upturned boat.

Within the interior twilight is, however, when it comes most to life. We gaze in awe at the sublimely corbelled roof, which is the true glory of the place; it has not allowed even one drop of water to enter in over a thousand years.

Onwards then for lunch at Gallarus Visitor Centre. Here, is a chance to mix and mingle. Some of the group are just walking for the day while others are doing the more demanding Irish Pilgrim Journey: the five paths which must be completed by those following the Irish Pilgrim Passport.

There is considerable international representation with walkers from the USA, the UK, Portugal and France. Among them is the Klassan family of five. Canadians, they are in Ireland to complete the120km passport journey. Later, I learn they are successful, with third sibling, Drake Klassan, becoming the youngest ever completer of the full Irish pilgrimage.

After Kilmalkedar, we ascend Reenconnell Hill where persons unknown have carved a rock spiral. For pilgrims past, this would have been a place of celebration: the first close up of the Promised Land with the ramparts of Brandon filling the horizon and the green and welcoming lands of Feohanach laid out below.

We celebrate with a singsong, tunefully led by our French Pilgrims before descending, as golden sunbeams pierce the evening mist. Then, by ambling delightfully unfrequented roads we reach our waiting bus to Ventry.

Later I read, that departing Ireland, Travis Klassan succinctly described the family’s Irish pilgrimage as “the most life-giving, soul-filling experience I have ever had”.

Trailhead West of Dingle go left at the roundabout and follow the signs for Ventry. Walk begins on Ventry strand (Q438 600)
Suitability Route is straightforward and well waymarked but can be slippery on the descent from Reenconnell Hill
Time Allow five hours
Distance 18km
Map OSi, sheet 70

Coronavirus: ‘you may have heard of a game called Plague Inc’
6