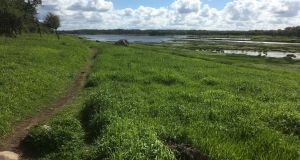 With due respect to Kavanagh and Heaney, Yeats is my most cherished Irish poet. And among his vast collection, The Wild Swans of Coole is my favourite. I was, therefore, glad for the opportunity to visit the place that did much to stimulate the poet’s artistic imaginings. Coole Park, Co Galway was once the home of Abbey Theatre cofounder Lady Augusta Gregory, and served as a spiritual home and wellspring of creativity for many giants of Irish literature, including Yeats, Shaw, Synge and O’Casey.

Setting out from a well-appointed visitor centre that unobtrusively occupies the old stables of the estate, I followed the Seven Woods Trail that was, as Yeats predicted, dry underfoot. Soon came a “wow moment” and the trees parted to reveal an aqua marine lake of intense beauty in a basin of deep green; Coole Lough is one of Ireland’s foremost examples of a turlough. Almost unique to this country, these consist of small lakes in porous limestone where water levels rise and fall with startling rapidity.

It was here that Yeats came upon his nine-and-fifty swans. He was referring to the whoopers that still arrive from Iceland every October to winter at Coole – although how he managed to count the swans accurately seems a mystery.

The stay-awhile charm of the lakeside seduces me, so I relax languidly on a convenient rock. It’s the wrong time of year, thus no “bell-beat of their wings above my head” from the whoopers. In compensation, a bevy of mute swans glide silently past on still waters that do indeed “mirror a clear sky”.

Written in the autumn of 1916, the evocative Yeats poem seems, at this moment, a quest for the security of a sublime and reassuring timeless in an increasingly turbulent world.

Onwards in the manner of Yeats as “I trod with lighter a tread” the Rocky Field that forms the flood plain of the Coole river. Limestone occasionally peeps above the surface as a reminder that the area is actually within the Burren lowlands. Eventually abandoning the waterside, I tag woodland paths that today are charmingly dappled with tree-moderated sunlight. A delightfully wide variety of tree species flank the trail, including a collection of exotic looking conifers that are native to North America.

Next stop is the splendid walled garden that contains the famous autograph tree of Coole. It was here, at the bidding of Lady Gregory, that the superstars of the Irish literary revival carved their initials on to the trunk of a magnificent copper beech. The letters have, of course, faded with the passage of time, although the hugely flamboyant initials of George Bernard Shaw immediately capture the eye above their more reticent companions.

Beyond the garden is the elevated plinth where once stood the great house of Coole. Sold to an uncaring Irish State by Lady Gregory in 1927, the contents were auctioned after she died and the vast literary collection was scattered worldwide. The house was then allowed fall into decay and, in a monumental act of State vandalism, was eventually demolished, thus removing from future generations a great part of Ireland’s literary heritage.

Returning to the visitor centre with a somewhat heavier tread, I wish fervently that Coole is a place where the lessons of history are soundly learned.

Getting there: Coole Park is located 4km northwest of the town of Gort, Co Galway. It is signposted from exit 16 on the M18 motorway

Map: Available from the visitor centre

Turbocharge your barbecue: Tips from the pros for cooking over flames
7

Does exercise help or hinder the body’s ability to fight off infections?
9