Ring in the new: 12 travel breaks to start the New Year

Christmas is all about tradition but New Year’s is about fresh starts. Why not start 2016 the way you mean to go on: having as much fun in as many fab places as possible 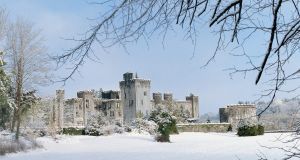 If you’ve been responsible for feeding the troops all over Christmas, it’s time to sit back and let someone else do the cooking. Head to Hayfield Manor just outside Cork city for a champagne reception designed to wet your whistle for the eight-course gala dinner that follows. Roll out the barrels indeed. And when you’ve rung in the New Year, to the accompaniment of the hotel’s resident band, it’s back downstairs next morning for a champagne breakfast and suitably late (1.30pm) checkout. From €299 per person sharing. hayfieldmanor.ie

Head north for a stylish New Year’s Eve package at the Ardtara Country House Hotel, recently awarded a Best Hotel Restaurant in Ulster gong. The Victorian Country House has a two-night New Year’s package including full Irish breakfast, prosecco and canape reception on New Year’s Eve and six-course tasting menu with specially selected wines, as well as live entertainment. Then retire in the wee hours to a bedroom with king-sized bed and open fire – it’s won romantic hotel of the year awards too. Prices from GDP199 (about €277) per person sharing. ardtara.com

Enjoy lazy days at Longueville House, a country estate outside Mallow in Co Cork, whose great value New Year’s Eve break sees you check in on December 29th for three days of leisurely breakfasts, country walks and cosy log fires. Enjoy candlelit dinners on two nights and a special New Year’s Eve dinner, with dancing, on the big night when owners the O’Callaghan family and staff will be filling champagne flutes and toasting your very good health. From €479.50 per person sharing. Longuevillehouse.ie

Make it a family affair at the Hodson Bay Hotel in Athlone. The hotel, which is on the shores of Lough Ree, has a five-course New Year’s Eve dinner in its award-winning L’Escale restaurant, with adult guests invited to kick-start the New Year with a live band while little ones can have dinner in its Penguin Kid’s Camp and their own disco event running until 1am. Teenagers can do what they do best and stare at their phones for the night in the dedicated teen room, breaking occasionally to roll their eyes. Two-night packages start from €219 per adult sharing. hodsonbayhotel.com

Capture a castle in Mayo

Celebrate Auld Lang Syne in very traditional style at Ashford Castle in Cong. Guests here arrive on New Year’s Eve to a glass of mulled wine and an afternoon treasure hunt around the grounds, designed to work up an appetite for the afternoon tea that follows in the drawing room. Evening festivities begin with a cocktail reception before a black-tie dinner, dancing and a midnight champagne celebration. Next day, fortified by a bucks fizz brunch, is a melange of golf, falconry demonstrations, boat trips and clay pigeon shoots, before more afternoon tea, dinner and music. The two-night package costs from €977.50 per person sharing. Ashfordcastle.com

Rock around the clock in Killarney

Liven up your New Year’s celebration with the queen of rockabilly, the indomitable Imelda May, who will be ringing in the New Year – with fellow Dub Damien Dempsey – at the INEC in Killarney. A fantastic venue for a getaway package at any time of year, stand by for the roof to be raised at New Year’s, with celebrations set to continue into the wee hours at both the Gleneagle and Brehon Hotels, which share the same grounds. A two-night stay at The Gleneagle, including breakfast each morning and concert ticket, cost from €183 per person sharing. The same package in the neighbouring Brehon starts from €248 pps. inec.ie

Voyage into 2016 on a cruise ship and you’ll be packing in cities, not suitcases. Start the New Year with a six-night Mediterranean fly/cruise with online travel agent E-Travel, on board the four star Norwegian Cruise Lines ship Epic – famous for the quality of its on-board entertainment. Fly out from Dublin on December 28th, bound for Barcelona, dump your kit in your cabin and set sail for Rome, Naples and Palma, Majorca. Stay in a balcony stateroom from €1,499 per person sharing, including return flights and transfers. e-travel.ie

See a different side of Spain with a New Year’s holiday in Andalusia, departing December 29th from Dublin to Malaga, and transferring for a seven-night stay at the four-star hotel Antequera Golf, on a half board basis.

Antequera is known as the heart of Andalucia, and a good base from which to see Malaga, Cordoba and Seville, excursions to which are all included in the package, as well as a special dinner and entertainment on New Year’s Eve. The package, including flights, accommodation and tours, costs from €829. traveldepartment.ie

Waltz into the New Year in Vienna

As you’d expect from Vienna, they do New Year’s Eve in style. From 2pm until 2am, the old city centre is transformed into a giant party zone, with a new Year’s Eve Trail to follow, hot punch and culinary treats on every corner and all sorts of musical entertainment. Check out the classical area on Graben and see the city’s dance schools offer crash courses – often literally – in waltz on Stephansplatz, with a firework display rounding things off on City Hall Square and in the Prater at midnight.

Then it’s up next day for a hangover cure brunch featuring the Vienna Philharmonic’s New Year’s Day concert on a big screen in front of City Hall.

Clickandgo has accommodation to suit, staying at the three-star Altwienerhof Hotel for three nights, B&B, from €489 pps. clickandgo.com

Keep your sunny side up in Dubai

Top up your tan with a winter sun holiday in Dubai this New Year. Stay at the five-star Marriott Hotel Al Jaddaf, a new hotel close to famous landmarks such as the Burj Khalifa, Jumeirah Beach, Dubai Creek and the Gold Souq and which offers a free shuttle bus service to Dubai Mall. With pool, spa, gym and numerous restaurants, there’s plenty of reason to just stay put and chill – and with temperatures typically in the high teens, it actually is chilled by UAE standards. Pay for five nights at the Al Jaddaf, including return flights from Dublin, from €1,876, and get one extra night for free, departing December 28th. Expedia.ie

Drop the ball in NYC

Times Square is lit up like a Christmas tree every night of the year but on New Year’s Eve, it goes into overdrive. Join the one million people who pack into it each year for a celebration that features star-studded musical performances, balloons, freebies, confetti and a pyrotechnic display so colourful you’ll be seeing it when you close your eyes for months to come. And, of course, you’ll be paying homage to the famous ball – made of Waterford Crystal no less. Sunway has three-night packages staying at the three star Wellington Hotel in midtown, about 1km from Times Square, on a room only basis, departing December 29th, from €1,769 pps, including flights but not transfers. Sunway.ie

What better way to work off all that Christmas pudding than to hit the slopes for New Year. Bring the kids and stay self-catering at the three-star Le Hameau du Mottaret apartments at Mottaret in the Meribel Valley.

With onsite shopping centre, supermarkets, restaurants, and children’s club, all built in a traditional wooden chalet style, the resort offers doorstep skiing, ease of access to the entire ski area and has a nice laid-back atmosphere for families. There’s a regular bus service to the centre of Meribel too. Prices for a family of four, including two under-12s, start from €2,517, including return flights to Lyon, transfers and seven nights’ accommodation, departing December 26th. directski.com