Retreat to the Big House: yoga and sleep in Lisnavagh

Lisnavagh House may be best known as a wedding venue, but on other weekends its focus turns to relaxation, offering yoga and sleep retreats to those looking to switch off 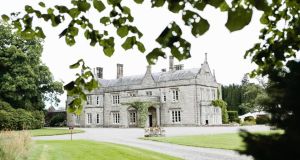 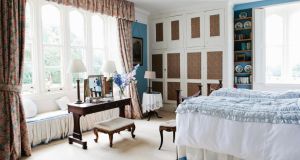 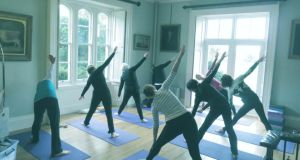 When Emily Bunbury’s husband William proposed to her, she slept on it before saying yes. Accepting his proposal wouldn’t just mean marrying him, but taking on his family’s 1,000-acre estate at Lisnavagh, Rathvilly, Co Carlow.

“When he proposed to me, I was like, gulp. I’d been to the house at that stage. I’d realised the scale of the place, but it was too late. I was madly in love with him and love really is blind,” she says. “I slept on it . . . then I said I’d help him with Lisnavagh. I meant it when I said I’d help taking on Lisnavagh, because taking on a place like this is a huge challenge and you just have to rise to it.”

Since 2006, Emily and William have attempted to do just that, by developing various businesses operating off the property. William runs the Lisnavagh Timber project, which uses hardwood from the estate’s 250 acres of woodlands to create Bunbury boards and bowls, while Emily runs the event-management side of the house.

Lisnavagh House began taking weddings in 2007 after spending some time rewiring and redecorating the property that was originally built in 1847; it has since become a well-known wedding venue. Looking to capitalise further on the house’s potential, Emily’s more recent venture – the Yoga and Sleep Retreat – is on quite a different end of the scale. “The retreats are very personal; they’re so different to the weddings when people are just coming here to party,” she says.

The retreat was a combination of ideas. For Emily, she wanted to bring her passion for yoga to the house through yoga retreats, while at the same time her brother-in-law kept suggesting she run sleep retreats on the estate. After some thinking, she felt one would beget the other.

“My brother-in-law and his family used to come and stay here and they always found it a really amazing place to sleep. It’s sort of soporific. That’s where the name, Yoga and Sleep Retreat, was born . . . I wanted to bring in the yoga bit to enhance the sleep.”

Lisnavagh House sits in the middle of the estate, away from the road. Even with Emily and William’s three young children playing in their wing of the house and its gardens, and preparation for a wedding going on outside the other side of the house, when we visit the silence is almost audible. Emily feels the historic house and its location are ideal for this kind of retreat.

“It’s a bit like yesteryear here,” she says. “You’re not coming to a modern building and people do lose themselves quite easily. There’s a sense you’re stepping so far away from your normal settings and lifestyle. That may be something that brings people to a different level of relaxation. Certainly people when they walk in here often say this place is very relaxing and homely, so I suppose they immediately feel relaxed.”

Even before the idea for the retreat, when Emily and William began redecorating the house, they wanted to put a focus on relaxation and comfort.

“I’m quite conscious of people who drive up here because they probably think it’s a terrifying place. It’s a big pile of granite and it’s quite an imposing place at times . . .

“When we were working on the house, we wanted to make it into a comfortable house, not into a hotel. We wanted to keep its charm and to make it so that when people come in here, they feel like they’re coming into a home,” Emily says.

When you arrive at Lisnavagh for the Yoga and Sleep retreat, you have a couple of hours to take a walk, settle in and get your bearings on the estate. The first yoga class begins at 5.30pm on Friday. This is the first session of up to eight hours of yoga you do over the course of the weekend. In between yoga sessions, you are free to do whatever you please, be that walking through the vast grounds, taking relaxing baths, availing of a treatment or simply just sleep. While Emily isn’t strict on it, every person on the retreat is encouraged to stay alone, in their own room.

“It’s really just about switching off completely. We are just constantly around people and we’re constantly on our screens. If you’re going away somewhere, you need to stop, switch off and be able to just look at yourself, not be frightened of assessing yourself and being at one with yourself. I think it’s really important that people are able to do that, rather than going to your room, your roommate being there and it just being chat, chat, chat. You need to stop and look at yourself and think ‘how am I’?”

Technology is limited in Lisnavagh to help the switching-off process. Although there is free wifi in the house, guests don’t have access to television and Emily encourages people to leave their phones off. “They don’t have TV here. No one has ever dared bring out a screen. They do have their phones. I ask them to switch them off, but I can’t take a phone away from somebody. I think it’s really important to get away from that sort of stuff. You have to teach yourself to do that really. I know it’s difficult because I’m the same; I’m always glued to my phone.”

Emily does all the cooking during the retreats, serving mostly locally sourced or home-grown vegetarian food. William’s aunt, Rosebud Bunbury, known around the estate as the “queen of salads”, provides them during the weekend to accompany Emily’s food. This healthy food and the slow process of switching off contributes hugely to good, deep sleeps, but nothing as much as the yoga, according to Emily.

“Yoga is good for mind and body, it helps with all sorts of things,” she says. “It keeps you calm, it’s good for your breathing, it’s good for your skin; it’s kind of overall good for all parts of your body. Meditation as well, I find that really helpful for me because there’s so much going on every day that it just helps clear my head. It gives you me-time, if you look at it sort of selfishly.”

Pamela Butler taught Emily yoga and runs most of the classes at the retreats. She has been teaching yoga for 15 years and classes during the retreats are aimed at all levels. “She taught me yoga and she’s got one of those lovely voices that kind of just makes you feel relaxed,” Emily says. “She usually has a class that are all different levels quite often so I don’t know how she gets it so she can teach them all, but what she aims to do I think is get people to feel confident enough to be able to do some home practice, which is obviously good for them.”

Each retreat typically has a maximum of eight people taking part due to space restrictions in the yoga studio. In September, work will begin on one of the estate’s old buildings to convert it into a space that can be used for both weddings and larger retreats. However, while there is sleeping space for more than 20 in single occupancy, Emily feels she will probably cap the retreats at 15 people to keep the intimate feel.

“When we came up with the idea, we were looking at these beautiful buildings and thinking ‘why on Earth aren’t we using them?’ . . . I think you have to be careful about how many people you bring into a retreat. There’s still room for 15, it’s not like they’ll be piled in together, but the idea at the moment seems to work quite well, so I don’t want to complicate it any more.”

While some yoga retreats emphasise restriction, Emily feels that in Lisnavagh, she is really trying to offer a little bit of luxury and an opportunity to recharge.

“I’ve noticed people look very tired when they come and it gives William and me great satisfaction that when they’re leaving, they look refreshed and recharged in such a short space of time. A lot of people say it’s really nice just to be able to switch off and recharge, and that’s it.

“It’s a treat. I’m not expecting them to walk away with a whole new concept on life, but they might have been able to just stop and feel good and be able to walk away from here feeling stronger, and hold onto that for a while – a bit like when you’ve been on holiday. That’s really what I want them to go away with. It’s nice, a little treat now and again.”